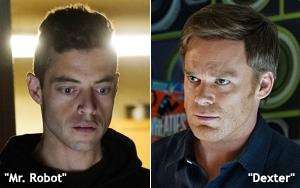 Where have I seen this guy before?

Technically, I hadn’t seen him anywhere, because this USA Network series called “Mr. Robot” is a new show. But he reminded me of someone.

When I watched the two-hour premiere of “Mr. Robot” a couple of weeks ago (it premieres tomorrow, Wednesday, June 24), aspects of this character’s life seemed familiar.

In other words, this hacker -- whose name is Elliot -- is a navigator of the more-secret passageways of the World Wide Web and polices them in the same secretive way that his targets use them. When I pondered this aspect of Elliot’s life, a lightbulb went off in my head: He’s not just any old hacker hobbyist -- he’s cyber-Dexter!

1. Dexter Morgan -- the title character of “Dexter” played by Michael C. Hall (2006 to 2013 on Showtime) -- was a forensic tech working in support of the Miami Police Department’s homicide unit. He used his crime scene expertise and his access to proprietary police information concerning recent murders to seek out serial killers and then kill them. Thus, Dexter was a serial killer of serial killers.

In much the same way, “Mr. Robot” ferrets out cyber-criminals using an expertise he also applies to his day job -- as an IT staffer for a cyber-security firm.

2. Both Dexter and Elliot are loners who pursue the secret portions of their lives -- in this case, murder and cyber-vigilantism, respectively -- outside of working hours, principally at night and into the wee hours of the morning. Dexter and Elliot both maintain superficial relationships with others, including co-workers and potential love interests, although they both suffer from emotional deficits that make it impossible for them to form meaningful personal bonds with anyone.

3. Their extracurricular activities are what drives the suspense in both series, although with Dexter, the stakes were higher for the simple reason that he was constantly in danger of being found out as a stone-cold psychotic serial killer who ritualistically butchered his victims (and took his sweet time doing it). Elliot’s in danger of getting discovered too, but mentally, he’s not in quite the same league as Dexter.

4. Both are fastidious trophy collectors. This was something that seemed almost to be lifted from “Dexter” (although I’m sure it’s a coincidence): On “Mr. Robot,” Elliot maintains an album in which he carefully stores computer discs that each contain the files he collected on his latest cyber-prey. The album is reminiscent of the box of meticulously labeled glass microscope slides on which Dexter -- a specialist in the characteristics of crime-scene blood spatter -- kept blood specimens from each of his victims.

5. In both shows, their vigilantism is supposed to serve some sort of societal purpose -- however warped that notion might be. For Dexter Morgan, killing other serial killers was supposed to be a benefit to society because it would rid Miami and its surrounding area of its serial killers (although these personality types were apparently so abundant in the Miami of “Dexter” that doing away with all of them was likely impossible).

In the premiere of “Mr. Robot,” Elliot is recruited by a mysterious cyber-vigilante group to aid them in their plan to engineer “the single biggest incident of wealth redistribution in history” -- a recalibration of the world’s computer networks that would erase the records of 70 percent of the world’s consumer and personal debt from a credit conglomerate’s servers. This is portrayed in the show as a blow against the “1 percent of the 1 percent” who, the show says, control the world.

This plot marks “Mr. Robot” as some sort of socialist’s fantasy in which the world’s wealth can be “redistributed” with a couple of mouse-clicks and the world would suddenly be a better place. On the other hand, this particular computer hack comes across, at the outset of this series, like an elaborate, but unjustified criminal activity.

Whatever one thinks of this wealth-redistribution scheme -- whether you’re for or against it -- “Mr. Robot” is an attractive show, smartly made and filmed in New York at locations ranging from midtown Manhattan to Coney Island. I highly recommend it.