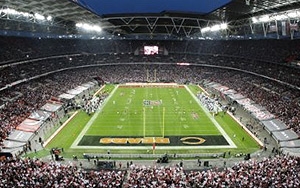 The NFL is back at Wembley Stadium for its ninth season of having U.S. teams play regular-reason games overseas. What's new this year is a partnership between the league's London-based organization, NFL UK, and New York-based media company Van Wagner Sports & Entertainment (VWSE). The latter will sell in-game field level television-visible LED signage for the upcoming season’s “NFL International Series at Wembley Stadium in London.” The League says this is the first time the NFL has used a partner to sell the space to advertisers. Because the games are broadcast in the U.S., sponsors get reach with U.S. viewing audiences.

This year the Miami Dolphins will play the New York Jets on Oct. 4; the Jacksonville Jaguars will play the Buffalo Bills on Oct. 25; and the Kansas City Chiefs will  face the Detroit Lions on Nov. 1. The morning broadcasts aren’t ideal, but they also don’t compete with U.S. NFL games: All U.K. games will start at 9:30 a.m. ET. The League says the Bills-Jaguars game will also be live streamed globally on Yahoo.

“There are a limited number of positions available across the three games, which we believe makes the opportunity even more valuable,” said Chris Pearlman, EVP of sales for VWSE. “Only a handful of advertisers will get a relatively large share of voice within the broadcasts.”

The international NFL games have grown their sponsorship rosters (which are separate from U.S. deals) over the past few years from about seven in 2009, when there was just one game, to 20 or so now, in a three-tier system — cornerstone, associate and local — and activated during the league's the three-game series in the U.K. Last year, Ion became the first “action camera” partner of the series.

The league's international commercial director, Marc Reeves, said last year that the London games are the only ones on the NFL schedule that offer sideline LED boards. Last year Visa was a major advertiser on the board.