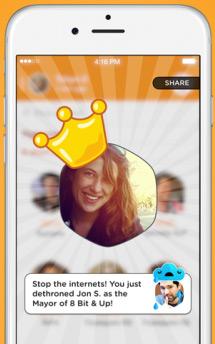 From location-based ad targeting to programmatic partnerships, Foursquare has recently been busy bulking up its ad operations.

Taking a break to focus on user experience, the company has decided to expand an early crowd favorite: the mayor crown.

Among users, Foursquare is still trying to regain its footing after making the drastic decision to divide itself into two distinct apps. One, named Swarm, does what people have long associated with the Foursquare brand -- it allows people to check in to physical locations and become the “mayor” of local establishments. Another, more Yelp-like service, took the Foursquare name.

Upon Swarm’s launch in early 2014, the service only allowed users to compete with friends for mayoral crowns.“But it just wasn’t as much fun,” Foursquare admits in a new blog post. “That’s why … we’re upping the ante and letting you compete for mayorships against everyone.”

Users can now claim the status of mayor after they have checked into a location more than anyone else, in the last 30 days. Only one check-in per day counts, and ties go to the reigning mayor.

The promise of location-based social networking has never been brighter. By 2016, 90% of smartphones will be enabled with GPS technology, and as a result, the global, real-time, mobile location-based advertising and marketing market is expected to reach $9 billion by 2017.

Location is closer to Foursquare’s fortunes than ever.

Earlier this year, in debuted Pinpoint -- an ad platform that targets consumers based on the places they’ve been. With its “snap-to-place” technology -- which filters out inaccurate location data -- the platform promises to deliver the precise places that brand audiences go in the real world.