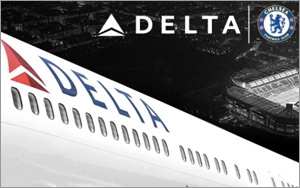 Delta Air Lines has signed a three-year-deal to be the official airline of one of the best-known professional teams around the world, Chelsea Football Club, the English Premier League and Capital One Cup champions.

The team got sponsorship backing from Delta for the first time in 2012. The “Official Airline Partner of Chelsea FC” agreement gives Delta LED exposure at each home game and on the Chelsea FC Web site. The Delta logo will also be included on media backboards for interviews conducted at Chelsea's stadium around Premier League home matches. The Delta 360 Lounge will also remain at Stamford Bridge.

The team’s biggest deal to date, one of the biggest in the sport’s history, was a $300 million, five-year sponsorship signed in February that made Yokohama Rubber Company Ltd. the team’s official shirt partner. The contract doubles what former shirt sponsor Samsung paid for the privilege. The deal puts the tire company's brand on all team shirts, including Chelsea FC youth teams.

The Yokohama deal is the sport’s second-heaviest on the financial scale. The biggest was the $559 million deal General Motors' Chevrolet division signed with Manchester United in 2012, and which put the Chevy bowtie logo on team shirts this year. Reportedly, the team is also being asked to drive Chevrolet cars to and from practice.

Other airline carriers, principally those based in the Middle East, are backing major football clubs. Emirates supports AC Milan, Real Madrid, Paris Saint-Germain -- and in the biggest deal in the history of English Football when it was signed in 2004, Arsenal Football Club. The latter partnership included renaming the team’s home venue Emirates Stadium. Last fall, Etihad Airways signed on as principal partner of the new New York City FC. The five-year deal puts the Etihad brand on team jerseys during MLS matches.

Barcelona FC, which Qatar Airways has sponsored since 2010, is rethinking that deal. The team's president, Josep Maria Bartomeu, was quoted as saying the social and political situation in Qatar has the team mulling whether the 165 million Euro contract is worth extending.

In the U.S., Delta is the official airline sponsor of 16 teams including the New York Yankees, the Los Angeles Kings of the NHL; and the Minnesota Vikings and Seattle Seahawks.

Delta will be flying Chelsea FC around the U.S. this summer as part of the International Champions Cup. The team will play the New York Red Bulls in Harrison, N.J.; then they will play Paris Saint-Germain FC in Charlotte, N.C. Then the team heads up to Washington, D.C. to play Barcelona.