Forget Him Not: Glen Campbell's Alzheimer's Journey On CNN 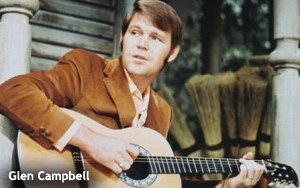 Glen Campbell might be the first celebrity to ever go this public with Alzheimer’s disease.

While former President Reagan famously announced he had Alzheimer’s in November 1994 and then disappeared from public view, Campbell -- now 79 -- was followed around by a film crew for the better part of 18 months after he was diagnosed with the disease in 2011.

The result is this documentary called “Glen Campbell … I’ll Be Me,” now coming to TV for the first time this Sunday night on CNN.

Campbell was 76 when he received the news that he had Alzheimer’s. He then went public with the diagnosis and announced plans to go ahead with a planned tour in support of his then-new album “Ghost on the Canvas.”

“I know there may be people who don’t understand why we’ve gone out on tour and why we’ve opened ourselves up and exposed this illness so publicly, why we’ve allowed a loved one to go on stage and take a risk of [making] a fool of himself on stage,” says Campbell’s wife, Kim, in the film. “But it’s something that he wanted to do and it’s something that we think is healthy for him and it’s been worth the risk because he’s done a great job and he’s still Glen Campbell and he’s trying to live his life as long as he can to its fullest.”

One could quibble here with her assertion that Campbell himself OK’d this tour and was fine with it, since everyone knows an Alzheimer’s patient is not likely competent enough to make such a decision, or in Campbell’s case, remember it for very long. On the other hand, Campbell did seem to enjoy himself.

“I’ll Be Me” begins with his diagnosis and then follows Campbell on the road -- a tour billed from the outset as a “farewell” tour of U.S. cities ranging from New York to Branson, Mo. It would end in Napa, Calif. on Nov. 30, 2012, the tour’s 151st concert. It would be Campbell’s final show, a decision made on the spot after Kim, along with other family members and associates, watched him struggle through this performance.

His performances during this tour -- the ones highlighted in the documentary -- are the most fascinating portions of this film, which covers the tour both onstage and off as he traveled in his tour bus with family members and long-time tour employees.

The most affecting thing about the film is the difference between the onstage and offstage realms. Offstage, Campbell is seen experiencing the slow but sure encroachment of Alzheimer’s, which renders him confused, sometimes temperamental and unable to remember the names of his wife Kim and grown children -- sons Cal and Shannon, and daughter Ashley, all musicians who make up part of his touring band -- although he realizes vaguely that all of these people are members of his family.

At various intervals in the documentary, Campbell is seen consulting doctors who inform him and his wife that based on the tests they have administered, his brain’s cognitive functions are steadily declining. Some of the conversation is candid, such as one discussion detailing how Glen cannot be relied upon to go to the bathroom in the middle of the night, but often goes wherever he feels like, due to his confusion about the layout of his own house.

By contrast, most of the onstage performance sequences are electrifying, as Campbell sings his signature hits (surreptitiously reading their lyrics off a TelePrompTer) and plays his guitar like a man you would not ever guess has Alzheimer’s disease.

“I’ll Be Me” will be shown twice Sunday night on CNN, with the first starting at 9 p.m. Eastern and the second at 10:48 Eastern. Commercial interruptions will be kept to a minimum during this one-hour and 44-minute film. Given its one-hour and 48-minute running time, that would indicate only about four minutes worth of commercial messages in the whole movie, which is why the start time for the second showing -- 10:48-- is so unusual.

There is only one sponsor -- Eli Lilly, the pharmaceutical company, which is involved in the research, development and subsequent marketing of drugs for treating Alzheimer’s (not curing it certainly, but inhibiting or slowing its progress). Ironically, the only Alzheimer’s drug mentioned in the film is Aricept, a Pfizer product.

On Campbell’s farewell tour, each concert started with perhaps his best-known hit, “Gentle On My Mind.” Under the circumstances, the song’s lyrics about “the rivers of my memory” take on a special meaning.

“Glen Campbell … I’ll Be Me” airs Sunday night (June 28) at 9 Eastern followed by an encore showing starting at 10:48 Eastern on CNN.