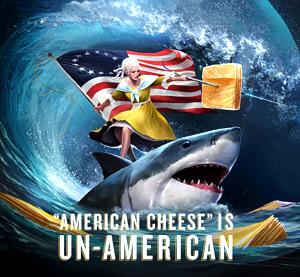 The Fourth of July is a time for Americans to celebrate all things Americana, like hot dogs, fireworks, and picnics. But this year, Tillamook County Creamery Association and its ad agency 72andSunny are launching an awareness campaign about an American imposter: "American" cheese. In reality, “American Cheese” isn’t cheese at all. When packaged and sold in the aisle, it’s called “processed cheese product” because according to the FDA, it can’t be sold as real cheese.

This national call to action includes an online film, digital banners, and a White House petition to declare independence from American cheese. The White House Petition can be seen here.

The creative showcases iconic American leaders, including George Washington, Abraham Lincoln, and Betsy Ross, as they "fight for America’s name and dignity by declaring processed American cheese Un-American." In one spot, Abraham Lincoln, atop a grizzly bear, spears the processed cheese product, to signal its unworthiness of being called "American.” The spot ends with a call-to-action to sign the official petition to the White House to remove America’s name from processed cheese products.

“Something that’s called American should be real and natural,” said Tillamook Senior Director of Marketing John Russell. “We want to get people to start thinking more about their dairy choices and to join Tillamook in the fight for authentic, real food."

This initiative is an extension of the “Dairy Done Right” campaign that launched this spring by first introducing The Tillamook Co-Op, where members can join Tillamook, online and for free, to have voting rights, access to board meetings, product idea submissions, and exclusive foodie events. Since April, more than 48,672 people have joined the program.

Tillamook spent $3.38 million on advertising in 2014, up from $2.61 million spent in 2013, according to Kantar Media. 72andSunny has served as its lead agency handling all creative and strategic duties since November of last year.