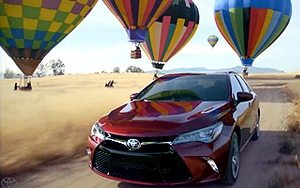 Toyota is launching a big campaign for its mid-size superego, and top-selling car in the country, and for its smaller alter ego, the Camry and Corolla, respectively. The new campaign is via Saatchi & Saatchi Los Angeles and three other agencies — Burrell Communications, Conill, InterTrend Communications — and media shop Zenith Optimedia, under the Total Toyota (T2) agency collaboration structure.

There are no fewer than three broadcast flights, with the first starting June 29, and running through November; two waves of billboards, starting the 29th and running through late September; plus print, digital, mobile and social executions, also until December. And the TV spots feature actor Miles Teller, who took endless abuse from J.K. Simmons (who is the insurance professor in the Farmer's Insurance campaign, by the way) in “Whiplash,” and will star in “The Fantastic Four” movie this summer.

Part of the campaign involves a geotargeting social media effort around sponsorship of Snapchat's Los Angeles Live Local Story. Toyota says it is the first brand to run a marketing program on Snapchat's Live Stories at the local level, which comprises curated user-submitted content. Toyota says the  program involves integrated short-video content with local-targeting feeds. The placement begins in August.

The automaker says it is also continuing a program with Google Places for advertising directed to each of 15,000 cities across the United States. A release on the campaign says it involves a Google-created API that lets Camry and Corolla banners pull in city-specific information with an “explore your area” message.

“We are really stoked about what we’ve been able to accomplish in this campaign,” said Jason Schragger, CCO at Saatchi's Total Toyota division. “Clearly, there is always a bit of a challenge when you feature two vehicles in the same campaign, but I think we’ve discovered that we can highlight each of them while exploring the amazing experiences that each make available to the driver.”

The Camry ads, with an individuality focus, show unique stops that a driver makes as he or she travels through life and creates their own story. The Corolla ad offers a metaphorical take on the journey, encouraging consumers to constantly “move closer to their goals, achieve their purpose and become the better version of themselves,” per the release. One ad borrows from author Jack Canfield’s “200 Foot Journey” metaphor, the central tenet of which is essentially that every journey requires one to focus on short segments of achievement.