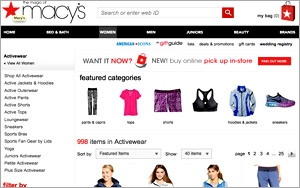 Measuring spend tells us which investments apparel advertisers made, but clicks and return on investment count more. The report doesn't go into details about ROI, but it does tell us which companies attract the most attention through clicks. Victoria’s Secret, Zulily, Macy's, Amazon, and Zappos led the top five in clicks. Impressions belong to Zappos, Amazon, Macy's, JCPenney, and Zulily.

While the numbers are based on paid-search activity on the 1,000 apparel-related keywords, it could include any advertiser bidding on those 1000 keywords in Q1 2015, even potentially advertisers in industries outside of retail apparel. Since the numbers are based on the paid search activity for the Web sites listed, they include apparel brands that both sell apparel via their own Web site and also have their apparel sold through other companies' retail sites that sell multiple brands such as Amazon, and Nordstrom.

The Top 20 apparel advertising buying related keywords collectively spent $46 million in Q1, accounting for 25% of total spend by all advertisers, with nearly equal amounts spent on desktop ads at $21, and PLAs at $19 million. They only collectively spent $5 million or 10% on mobile PLAs, which is the same percentage spent on mobile PLAs by all advertisers sponsoring the keywords. The top 20 apparel advertisers spent only $384,000 or less than 1% on mobile text ads, per the report.

On Monday, Kantar Media, AdGooroo's parent company, also released numbers showing that total U.S. advertising spend fell 4% in the first quarter of 2015 to $37.4 billion, and for the first time called out paid search spend through its search marketing AdGooroo division.

Digital media ad spend in paid search reflects text ads on the Google and Bing search engines, rose 7% in Q1. Automotive, financial service, media and retail advertisers led. Expenditure for Online Display, which is based on desktop display ads only and excludes video and mobile ad formats, declined 8.7% compared with last year. Kantar said in the report that the main factors were lower CPMs; as well as reduced page traffic, pointing to mobile as the likely factor.