TV Binging On The Rise 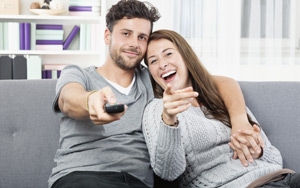 TV binging is growing. But while it can bring much joy to consumers, it can also bring the blues. A new study on TV binging by TiVo Research says that 52% of those surveyed are "experiencing feeling sad" when they approach the end of a TV series.

Apparently, this has been disturbing some sleep patterns as well. TiVo says 31% have "lost sleep to binging," and 37% say they have spent entire weekends binging.

TiVo says the binging is not just fueled by long stretches of repeat programming on traditional networks, in the summer or around holidays, but also full seasons worth of programming on Netflix, Hulu and Amazon. Netflix continues to be the leader here: 66% of “season” bingers use the big subscription video on demand service.

In addition, the negative perception of binge viewing has declined among those that TiVo surveyed -- to only 30% from 53% just two years ago.

The results also reveal that 32% deliberately put off watching an entire season of a show until they can watch the whole season at once -- up slightly from an increase in 2014; and 61% binge three or more episodes of the same show in one day, because they fell behind on their show.

Also, 45% admit they binge because they learned about the show after many episodes had already aired and needed to catch up; nearly 40% say some shows are better when watched back-to-back.

In March, TiVo surveyed 12,458 people through an opt-in panel, looking at second-by-second viewing, which was anonymously tracked on an ongoing basis. Viewing data is merged with monthly attitudinal surveys, resulting in behavioral habits and television viewing.

TiVo Research defined “binge-viewing” as watching at least three episodes of the same series on the same day; “season binging” is defined as watching an entire season (or more) of a specific program within a few weeks.

trends, tv
1 comment about "TV Binging On The Rise".
Check to receive email when comments are posted.
Next story loading