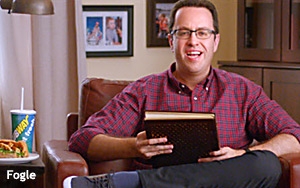 Subway expressed "shock" and said it would be closely monitoring the situation as Federal authorities today searched the Zionsville, Ind. home of Subway spokesperson Jared Fogle.

FBI sources told Fox 59 News that state and federal investigators were serving warrants at Fogle’s home in connection with a child pornography investigation.

In late April, Russell Taylor, who had been executive director of The Jared Foundation, Fogle's nonprofit organization for fighting childhood obesity, was arrested on federal child pornography charges. Investigators said they found hundreds of child pornography videos in Taylor's Indianapolis home. In May, Taylor unsuccessfully attempted suicide in jail.

After Taylor's arrest, Fogle issued a statement saying that he was "shocked to learn of the disturbing allegations" against Taylor, and was “immediately severing all ties" with him.

Subway issued its own statement: "We don’t have any affiliation with the foundation, and we were disgusted to hear about these claims. We’re glad Jared took quick action to sever all his ties with Mr. Taylor.”

As of mid-afternoon Tuesday, Fox 59 was reporting that the authorities would not say whether the Fogle house search was related to the Taylor case.

Fox reported that Fogle left his residence in a car, with his lawyer, Ron Elberger, shortly after noon, and that Elberger had released a statement: "Jared has been cooperating with law enforcement and its investigation of certain unspecified activities and looks forward to its conclusion. Jared has not been arrested, detained or charged with anything."

Subway quickly released a statement: "We are shocked about the news and believe it is related to a prior investigation of a former Jared Foundation employee. We are very concerned and will be monitoring the situation closely. We don’t have any more details at this point."

Not surprisingly, the news about Fogle, aka "The Subway Guy," quickly became a top-trending topic on Twitter and Facebook.

Fogle's inspirational story of having lost more than 200 pounds by eating Subway sandwiches and walking was the foundation for the chain's pioneering, extremely successful positioning of offering a healthier fast-food alternative.

In recent years, Subway's advertising has been more heavily focused on using high-profile athletes — its "Famous Fans" — as brand spokespeople, but Fogle has continued to be integral in its marketing.

He has continued to make numerous public appearances for the chain, and maintains a large social media fan base on behalf of Subway. During the 2013 Super Bowl, Subway ran a TV spot celebrating Fogle's anniversary of maintaining his weight for 15 years. Last July, Subway had Fogle make a cameo appearance in "Sharknado 2."

"Jared is inextricably linked with our brand," Subway CMO Tony Pace told Marketing Daily at the time. "He's a real, authentic person, and it's important that we retell his authentic story, because some younger people might not know the original story."

In the spot, Fogle says that he's even more motivated to stay fit in order to be a good role model for his two kids, and because he wants to "pass along better eating habits to young people everywhere" — a message with strong appeal for Millennial parents.

Whatever the outcome for Fogle, all brands obviously fear the social media furor and media coverage that accompany such celebrity news.

"This is the risk you take when you have a brand spokesperson," says Laura Ries, co-founder and partner in the Ries & Ries marketing strategy firm. "The right spokesperson can do tremendous things for a brand, so taking that risk is worth it in some cases. But the downside is that spokespeople are human beings who may make big mistakes or have big flaws."

When the worst happens, she says, a brand must assess whether it should stick by the spokesperson — as Nike did with Kobe Bryant, for instance — or "drop them like a hot potato," as most brands did after the Tiger Woods scandal.

Stressing Fogle's critical contributions to the brand over many years, she says, "If I were Subway, I would be looking to distance the brand from him, no question. You don't want to jump too soon, but you can't wait too long, either.

"I think a lot of people are going to be more disappointed or sad, because he was well liked, and perceived as a 'real guy,' " Ries adds. On the other hand, it's the "shock factor" of a contrast between perception and reality that can "scare and upset people," and at least for a time, the vitriol on social media will no doubt come "hard and fast," she notes.

Ries feels that the statement Subway released today struck the right tone and message, and that the brand should, while being responsive and straightforward, not feel obligated to go much beyond that in its subsequent statements.

For Subway, there may be a saving grace in the fact that Fogle isn't at the "height" of either his celebrity or his association with the brand,  she believes.

But perhaps most important, "Subway is a huge, very strong brand that can weather a storm like this, whereas this kind of event could be a potential killer for a weak, secondary brand," she says.

Editor's note: After this article was posted, Subway released a second statement on July 7: "Subway and Jared Fogle have mutually agreed to suspend their relationship due to the current investigation. Jared continues to cooperate with authorities and he expects no actions to be forthcoming. Both Jared and Subway agree that this was the appropriate step to take.”