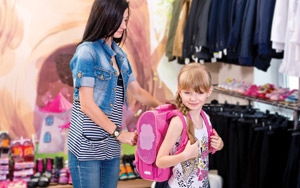 Summer may not even be half over for many students, but parents are already beginning to think about back-to-school shopping, and they’re not waiting for retailers or anyone else to give them the go-ahead to get underway.

According to research from advertising automation company Rubicon Project, nearly a quarter (23%) of parents of K-12 students have already started their back-to-school shopping, and will continue to do so throughout the remainder of the break.

“The consumer has taken control of the shopping season,” Dallas Lawrence, senior vice president and head of corporate communications for Rubicon, tells Marketing Daily. “Mom and dad are deciding when they shop, where they shop and how they shop.”

During that time, spending is also expected to increase, with K-12 parents planning to spend an average of $873 per student this year (college parents are planning to spend more than $1,100 per student). Boosting those budgets is a need for more technology, which has moved to a position of prominence. Nearly two-fifths of parents (38%) intend to purchase products such as laptops, tablets and phones specifically for in-class use. Concurrently, more than a third (34%) of college-student parents and about a quarter of high-school parents plan to shop for new mobile plans this summer.

“A significant number of parents are making technology purchases based on in-class requirements,” Lawrence says. “Technology is becoming a necessity in the classroom.”

With more time to plan — and more products to shop for — consumers are more likely to be shopping around for deals wherever they can get them, Lawrence says. Nearly two-thirds of parents (61%) are looking at store sales and promotions when back-to-school shopping, and 74% said they prefer to shop at a big box retailer or large chain store if it meant a better deal.

People are also more likely to be swayed by digital advertising this summer. Nearly half of all parents said they spend more time online than in front of the television, which has changed the way they research and purchase goods. For instance, half of all college parents clicked on an online ad within the past seven days and nearly as many (49%) clicked on a mobile ad. About 40% of those parents also said they had made a purchase based on a mobile or online ad they had seen.

All of those factors lead to an opportunity for retailers and marketers to reach parents with relevant information and competitive pricing, long before the traditional back-to-school season begins, Lawrence says.

“[Parents] know what they need to buy, and they’re willing to buy it anywhere,” Lawrence says. “If you create value-driven advertising that helps people find [products] they need, they’re agnostic about where they get it from.”