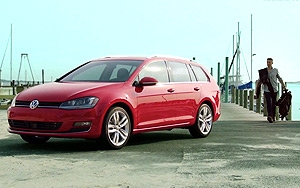 Volkswagen has done a lot with sharks over its four-year sponsorship of Discovery Channel's yearly Shark Week event. The Herndon, Va. company has had a Beetle-shaped shark cage, complete with wheels and motor, rolling along the sea floor, digital games where players have to keep their fingers constantly moving, and a new approach to soundtracks.

The latter is happening this week, as VW rethinks the music of sharks, an effort by the automaker and Discovery to show that sharks are not to be reviled and regarded as humankind's universal enemy. The idea is to correct what, since “Jaws,” has been ominous, throbbing soundtrack presaging a horrible, wrenching death.

The effort, Sharks ReScored, via Deutsch L.A., with Discovery, is tied to the launch of the Golf SportWagen, with the unifying idea that the new car will similarly change the way people think about wagons -- a word in the auto business that, like hatchback, is verboten. The campaign includes a microsite where people can play a game using one's computer camera to change the swimming motions of a filmed shark, and watch a mini documentary about how the automaker and Disvoery came up with the new musical theme for the Discovery series.

The doc features marine biologist Luke Tipple and J. Ralph, the composer of the new music. Tipple, who drives the SportWagen in the film, discusses how humans‘ relationship with the ancient creatures need to change to prevent their extinction. “We as humans kill about 100 million sharks per year,” he says. The movie documents how Tipple worked with Ralph to develop the theme, and then the recording sessions.

Of the relationship, Vinay Shahani, VP marketing, Volkswagen of America, Inc., says: “Every year it's kind of fun for us. When you work with Discovery year in and year out on different themes we get to know each other and the creative synergy gets stronger. It's a challenge to come up with something better than in the past."

He tells Marketing Daily that the automaker wants to promote wagons as more exciting and flexible. “Wagons are always seen as stodgy grocery getters. We want to show that the new sport wagon is fun to drive, nimble and offers great performance.” He points out that Volkswagen is running a concurrent campaign for the SportWagen that has been live since April and will continue through the fall.

Last year, Volkswagen worked with Deutsch L.A., MediaCom and Edelman to tout the Golf TDI. The idea was to tout the 567 mpg performance with digital games where users had to scroll via mouse or pad for 567 miles.

The other big partnership for Volkswagen is with Sunday Night Football. And, says Shahani, to tout its TDI diesel technology, last year Volkswagen worked with CNN and the “Golden Globes.”