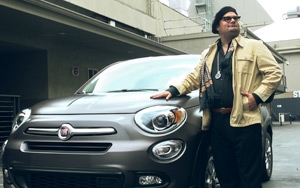 Fiat and NBCUniversal are playing on the brand's Italian roots with a cross-portfolio partnership around the all-new Fiat 500X crossover, featuring SNL cast member Bobby Moynihan.

Said Casey Hurbis, Fiat's U.S. head of marketing communications, in a statement, “Working with director Dennie Gordon and the NBCUniversal team to create custom content that aligns with our shared sensibilities and allows us to connect with consumers across on-air, social and digital platforms is a collective win-win.”

NBCUniversal recently ran a campaign with Honda, giving the automaker access to SNL cast members to tout its new crossovers. Prior to that the media company’s CIA unit worked with Jeep on a campaign for the 2015 Renegade subcompact crossover. That program was wrapped around the iHeartRadio Music Awards, and ran the campaign on on Bravo, E!, NBC Entertainment and Syfy.

In June this year, in another deal put together by the network’s Client Solutions Group, Toyota became one of the sponsors of USA’s “Playing House.” The automaker, and other sponsors, got "custom creative and brand spots during the VOD episodes. On-air integrations and custom creative included advertiser inclusion branding. Those were co-created by the stars and executive producers of "Playing House," Jessica St. Clair and Lennon Parham.