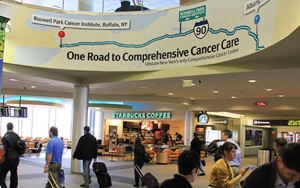 The airport advertising marketplace is undergoing consolidation, with Lamar Advertising Co.’s announcement that it has acquired Alliance Airport Advertising, giving it control of out-of-home ad assets in some of the country’s larger airports.

These new additions augment Lamar’s existing airport network, which includes airports in Albany and Buffalo, New York; Spokane, Washington; and Boise, Idaho, among other locations. The combined airport advertising division will be called Lamar Alliance Airport Advertising and will be led by Alliance founder, President and CEO Shauna Forsythe.

However, smaller competitors have emerged in recent years, including Titan Air, a division of transit advertiser Titan, which struck a deal with Charlotte Douglas International Airport in 2013.