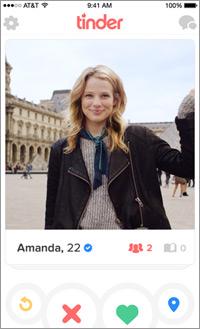 However unlikely, Tinder users can now confirm the authenticity of their interactions with celebrities and other public figures. Yes, like Twitter and other popular networks, the dating app is adding verified symbols to VIP accounts.

Tinder is also making it easier for users to connect their profiles with their Instagram accounts, showing users the mutual friends -- andfriends of friends -- they have in common with potential matches. The latter change is designed to add more context and an extra degree of connection to every swipe.

Tinder only recently integrated with Instagram, so users of the dating app can connect to their Instagram accounts with a single tap.

Tinder also recently began showing users the full set of a person’s Facebook interests and highlighting the interests that people have in common.

The tweaks are some of the first under the direction of Christopher Payne, who took over Tinder as CEO, in March.

Tinder recently revealed plans to turn its popularity into profits, which, to the chagrin of many on Madison Avenue, has little to do with advertising. Rather, the company launched a premium dating service, dubbed Plus, which charges different monthly rates to users based on their regional location and age.

The nearly 3-year-old Tinder quickly emerged as a popular online dating app, particularly among millennials. Its free app now boasts about 1.2 billion profile swipes, per day, along with about 15 million “matches” -- which occur when two users enter into a text conversation after approving each others’ profiles.
apps, millennials, mobile, social media, social networks
Next story loading