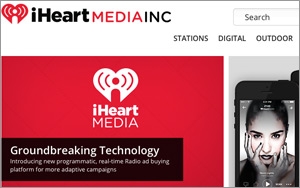 Consumers are getting a new streaming audio option courtesy of iHeartMedia and AT&T U-verse, which are joining forces to launch iHeartRadio for U-verse TV customers. This marks the launch of the first live streaming radio application on AT&T’s multiplatform cable subscription package.

Like the iHeartRadio app for mobile and desktop, iHeartRadio on U-verse TV allows users to browse streaming audio from thousands of live radio stations, as well as search radio stations based on genre, location, or keyword.

The app also provides personalized recommendations based on their musical preferences, listening habits and location, and allows users to build a list of “My Stations,” with favorites and stations they have recently listened to.

In the near future, AT&T and iHeartMedia also plan to add a number of new features, including custom stations drawing on a library of 20 million songs, plus song lyrics, artist bios, and stations recommended for moods and activities. The service will also grant access to thousands of podcasts.

Earlier this week, iHeartMedia announced that Carter Brokaw is joining the company as president of digital revenue strategy; Brokaw previously held positions at Guardian News and Media and Slacker Radio. He will work closely with iHeartMedia’s programmatic advertising operations.