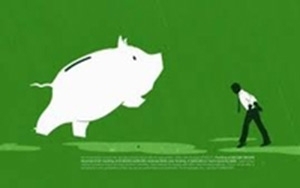 In a preemptive lawsuit filed in late June against Lions Gate Entertainment, Havas and client Ameritrade told the U.S. District Court in New York that Lions Gate Entertainment had threatened to file a claimagainst the agency and financial company for trademark infringement against its nearly 30-year-old film "Dirty Dancing." The companies told the court that the threatened action was meritless and asked for a declaratory judgment on the matter.

The New York court has not ruled yet, but now Lions Gate has filed its own suit — in Los Angeles — alleging the trademark infringement claims that Havas and Ameritrade said they had been threatened with.

The allegations center on an ad campaign that Havas created for its financial services client that ran from October of last year until April of this year that featured a man holding a piggy bank over his head with the tag line “Nobody Puts Your Old 401(k) in the corner.”

Lions Gate alleges in its Los Angeles suit filed July 2 that the copy and images in the campaign infringe on trademarks pending with the U.S Patent and Trade Office. The studio says that the quote from the film “Nobody puts Baby in a corner” is one of the most recognized quotes in the history of filmdom and that the quote and film trademarks “have come to be known to the purchasing public as conforming to certain standards of quality.”

As a result, the company added, the trademarks and goodwill associated with them are of “tremendous value to Lions Gate and its authorized licensees and business partners.”

The image of the man in the Ameritrade ad lifting a piggy bank over his head is evocative of the famous “dance lift” scene near the end of the movie where actor Patrick Swayze lifts “Baby” (portrayed by Jennifer Grey) over his head.

Lions Gate alleged that the “infringing art” in the ads was “intentionally designed to be virtually identical” to the dance lift in the movie. Combined with the “adulterated” tagline, the studio contends, the ad campaign “has caused and is likely to cause people to falsely or incorrectly believe that Lions Gate” approved the ads or is somehow associated with Ameritrade.

Havas and Ameritrade contended in their New York suit that the ad campaign ended in April with no plans to revive it in the future and that the likelihood of any confusion is remote. But Lions Gate said the campaign didn’t end until it learned of it and notified Havas and its client of the alleged infringement.

In back and forth exchanges discussing a possible settlement before the suits were filed Lions Gate told the LA court Havas and Ameritrade took the position that the studio did not have “enforceable trademark rights” to the “Nobody puts Baby in a corner line,” and that the campaign was “parodic” thus avoiding any potential confusion. Even if the latter were true, the studio argued, the intention to draw a connection—parodic or otherwise--was an infringement.

After failing to come to terms, Lions Gate contends, Havas and Ameritrade rushed to file suit in New York to gain “home court and substantive law advantages.” The studio argued however that its choice of forum — Los Angeles — is entitled to great deference given the nature of the claims.

In addition to rulings that its trademarks were infringed upon, Lions Gate wants three times the amount of compensatory damages to be determined at trial and punitive damages for the “willful and wanton nature” of the alleged violations.

There is no response yet from Havas and Ameritrade to the studio’s suit.