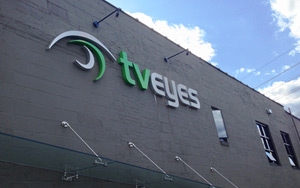 Fox “has worked to build an extensive online and digital presence that heavily relies on video clips of its television content,” the company says in papers that were made available on Wednesday. The network adds that TVEyes' downloads “threaten to destabilize that evolution by sidestepping the television news channels and providing the channels' content directly to TVEyes' subscribers as unlimited high quality, high definition video clips.”

Last September, Hellerstein ruled that TVEyes makes fair use of Fox News Network's material by indexing news clips and providing snippets of them to subscribers. But he didn't rule at the time on whether TVEyes also is protected by fair use when it lets people download or share clips.

TVEyes enables subscribers to its $500-a-month service to search for television programs by keywords, view snippets and download and share clips. To accomplish this, TVEyes records every program broadcast on more than 1,400 TV and radio stations.

Hellerstein said in September that the indexing and clipping service was “transformative,” and therefore a fair use, because it serves a different function from the original broadcasts. He pointed out in the ruling that TVEyes' subscribers include the White House and U.S. Army.

For its part, TVEyes argues that its download and sharing features are essential to the service. “Allowing subscribers to save, email and download these clips is fair because these functions are necessary to effectively research and monitor television broadcasts,” the company says in a motion for summary judgment made available on Wednesday.

Other TV news broadcasters, including CNN, CBS and NBCUniversal recently filed a friend-of-the-court brief supporting Fox's position. The news organizations argue that copying, storing and offering downloads of news clips, in order to offer a commercial service, is not a fair use.

On the other side, a coalition including The Nation's former editor and publisher Victor Navasky, The Nation columnist Eric Alterman, media company Brave New Films and media-watch group Fairness and Accuracy in Reporting supports TVEyes.

“Absent the mass digitization of television content, there is no feasible way for media critics to capture and present a comprehensive view of all of the content being broadcast to the news-consuming public,” those groups argued in a friend-of-the-court brief.