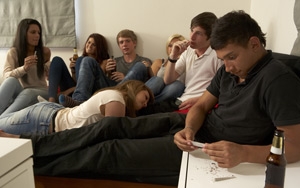 Advertising works after all, but sometimes that’s not actually a good thing. Like alcohol ads supposedly targeted only to adults, ads for medical marijuana are also seen by teenagers and increase the likelihood that they will actually use the drug, according to a new article in the journal Psychology of Addictive Behaviors.

These findings will doubtless become fodder in the ongoing debate about marijuana legalization.

Researchers from the RAND Corporation surveyed over 8,214 middle school students from southern California, with a median age of 13, about their exposure to medical marijuana ads and their actual marijuana usage from 2010-2011. In the first part of the survey, the researchers found that in 2010, 22% of respondents recalled seeing at least one medical marijuana ad in the past three months, which increased to 30% a year later.

In the second part of the survey, the same adolescents were surveyed about their current marijuana use, as well as their intentions for future use. According to the authors: “Greater initial medical marijuana advertising exposure was significantly associated with a higher probability of marijuana use and stronger intentions to use 1 year later.”

However, the authors also noted that the study couldn’t rule out that other types of causation might explain the correlation. For example, adolescents who were already inclined to become more interested in using marijuana might be more prone to notice ads for medical marijuana.

Still, the results of the study will fuel criticism in light of previous studies showing that marijuana use by adolescents can have long-term negative effects on learning and cognition, which in turn affect socialization and employment prospects. Among other concerns, the RAND authors point out that ads for medical marijuana could lead adolescents to believe there are no serious impacts associated with the drug.