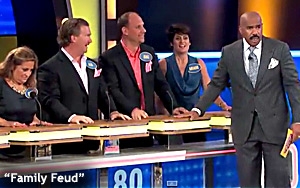 Recent weekly ratings point to a 1% increase in total average viewers and an overall season-to-date sharp 21% hike over a year ago -- to 9.14 million viewers through June 28. “Feud” witnessed some major time-period improvements over 2014.

Two CBS Television Distribution shows -- “Wheel of Fortune” and “Jeopardy” -- maintain their No. 1 and No. 2 status for all syndication shows. “Wheel” is at 10.8 million viewers, virtually unchanged versus a year ago; “Jeopardy” at 10.2 million, up 2% versus the year before.

CBS’ “Judge Judy” comes next at 9.5 million viewers, down 5% for the season versus a year ago, “Judy” remains the top-rated court show. “Feud” sits in fourth place.

Warner Bros.’s “The Big Bang Theory” follows at 9.04 million viewers, also off 5% from its season-to-date numbers of a year ago. “Bang” is the best-performing off-network sitcom in syndication.

While “Bang” is down, the next two high-rated sitcoms have taken bigger hits: Twentieth Television’s “Modern Family” is down 15% to 5.7 million viewers and Warner Bros.’ “Two and a Half Men” has given up 18% to land at 4.4 million.

The race for top entertainment magazines is getting closer. CBS’ “Entertainment Tonight” is down 7% to 4.8 million viewers; while CBS’ “Inside Edition” is now up 4% to 4.4 million. Warner Bros. Branded Television “TMZ” has also boosted viewership, 4% to 2.8 million.

In syndicated talk, the top two shows have picked up viewers this season: CBS’ “Dr. Phil” is 5% higher to 4.36 million and Disney-ABC Distribution’s “Live with Kelly & Michael” has also gained 5% to 4.01 million. Warner Bros. “Ellen DeGeneres” comes next, down 2% to 3.61 million.