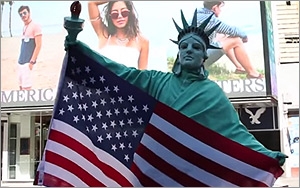 Content that indexes in search engine query results brands a company's image. Sometimes that content has little to do with the services the company offers. It really begins with an idea and belief. Much of that content initially gets posted to YouTube or Facebook.

Take for example a video from Western Union. The company took a photojournalism crew and spent seven days traveling 13,779 miles across the United States to ask people if they believe in the American dream. Some 200 consumers nationwide took part in the survey sharing their opinion on the topic.

"Connecting with customers emotionally tells them you understand their hopes, dreams and aspirations," said Nidhi Gupta, Western Union’s senior marketing manager, Americas. "If we give customers a strong message they will seek out the brand."

The video was produced by the agency Quirk Creative, but the idea was conceptualized in-house based on their understanding of customers.

Overall, those participating in the video said the American dream still thrives. It's evident in the responses from those on Facebook. As a primarily organic social and digital campaign, the interest from Facebook fans initially captured more than a 1700% engagement rate on the social site, between Feb. 17, and June 30, 2015.

The year-long 2015 campaign offers more than $182,500 in aggregate cash prizes redeemed for a down payment for a house, school tuition, family meals and more.  The campaign is intended to honor the research finding that many of Western Union customers live in one part of the U.S., but have families and loved ones in another part of the world.  These people have aspirations and typically value driven, which is the reason for the campaign.

People can submit an entry form without making a money transfer, or those that do are automatically entered when sending money through the system. The amount awarded depends on the specific promotion at the time.

So, what's my point? Creating great content only requires an idea, ideology or belief.