Kantar: Marketers Backing Away From Coupons 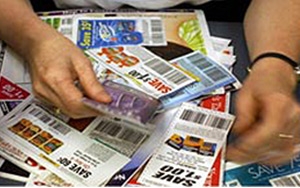 Marketers are shifting their couponing strategies, using them less often but making them more valuable, according to a new report from Kantar Media. The number of coupons issued fell 0.9% to 156 billion for the first six months of the year, with those for consumer-packaged goods coming in flat, and those for nonfood items climbing 4.4%. But the average face value climbed 6.5%, and the overall value of coupons issued rose 5.5% to $281 billion.

Stores slashed their promotional pages 21.6%, compared to the first half of 2014, running just 11.4 billion pages in the first half of 2015. And while Walmart continues to be the coupon kingpin, its cuts were the most drastic, with 4 billion pages representing a 24% reduction. Bucking the trend is Dollar General, which doubled its coupon use. And the number of retailers sank to 99, from 125 a year ago.

But marketers also seem to be cooling on coupons. The report, from Marx, a Kantar Media company based in Minneapolis, says that 255 manufacturers participated in store promotions in the period, down from 325 last year. And nonfood products, especially for personal care products, now dominate coupons, and account for 68% of all freestanding insert coupon activity.

“Non-Food activity has increased share of overall FSI coupons by 10% over the last five years,” says Lisa Ekstedt, director of custom solutions, in the report. “Where we are seeing the greatest activity in four out of those five years is in the personal care category. Additionally, the health care category has surpassed dry grocery as the second most active area for the first time in mid-year trends history.”

Emarketer predicts that 97.4 million people will redeem a coupon using a tablet, smartphone or other mobile device this year, or 43.2% of all adult mobile device users. That represents an 18% increase from last year.
mcommerce
3 comments about "Kantar: Marketers Backing Away From Coupons ".
Check to receive email when comments are posted.
Read more comments >
Next story loading