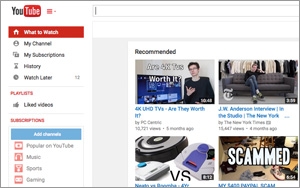 Viewers can't search through television commercials and how-to tips on broadcast TV, but they can on YouTube. That's one reason Google's video site reigns over many other search engines.

Google estimates that viewers spend 40 minutes per session, on average, on YouTube from a mobile device, Omid Kordestani, chief business officer for the company, told analysts during the company's second-quarter 2015 earnings call.

He said the number of advertisers running video ads on YouTube rose 40% in the quarter, compared with the year-ago quarter, and for the top advertisers the average spend rose more than 60%.

Brands can do much more with video segments running on YouTube than they can for those running on broadcast television. Perhaps that explains Pivotal Research estimates suggesting YouTube is equivalent to about 2.2% of global TV consumption.

While Google did not disclose the number of hours people spend on YouTube worldwide, Brian Wieser, Pivotal research analyst, called YouTube an "important media property" -- writing in a research note published Friday that in April 2013, YouTube stated it generated 6 billion monthly hours of viewing, up 50% year-over-year.

"If we assume 50%-60% growth has been sustained and that 6 billion was a typical month back then, YouTube would be at 14 billion monthly hours of viewing, or around 170 billion hours of consumption on an annualized basis this year," he explains.

Discoverability continues to become a major factor on YouTube, such as image searches for outfit ideas for back-to-school, but the amount of time viewers spend searching for content remains unknown. One trend that is becoming more prevalent points to the use of hashtags for specific outfits. The use of hashtags like #OOTD, which stands for Outfit of the Day, continues to rise.

Those hashtags that help viewers find content also help brands connect the dots from one social platform to another. Some of that content relates to first-impression videos, a live review of the products, which has become a segment of searches on the rise, per Google.

"On a per-user basis, if we assume 1.75bn unique monthly users against the aforementioned 170 billion hours would equate to around 100 hours per YouTube consumer per year," Wieser wrote. While that's a significant number, if correct, he challenges YouTube's self-comparison to television.

Wieser's view -- a bit more gentle when comparing YouTube against TV -- sees the video site as becoming more of a "TV-equivalent if it begins to invest more meaningfully in what most advertisers would consider to be truly 'premium' content, where advertisers can better build their brands by way of associating with the media brands that might be contained within YouTube."

Next week at the annual VidCon conference in Anaheim, Calif., brands may discover just how serious Google is when it comes to creating a broader TV universe with features like searching brands only found online.