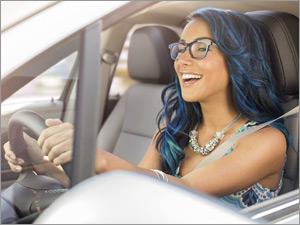 Saturday morning as I sat at an intersection on Pacific Coast Highway in Huntington Beach waiting for the red light to turn green I watched a woman with fire engine red hair walk through the crosswalk from one side of the street to the other. She looked to be in her 60s. Stay with me.

Earlier in the week, I walked into a beauty supply store to buy nail polish. I chose two colors -- tan and lavender -- walked up to the register, put the nail polish bottles on the counter and pointed to each, asking the woman behind the register which one I should choose -- without glancing up.

The woman, who looked about 25, pointed to the tan color and said "boring." I looked up and smiled. She wore purple highlights in her hair. "You're asking the wrong person," she said. "I love purple."

Some might view these individualists as a rebirth of consumers in the 1960s, a generation of free spirits showing their individuality. The newest members are more willing to take chances and want to stand out and be noticed. It's all about me. I asked my hairstylist what type of women dyes her hair blue, red or purple. She said they were mostly the kind who are age 60 or older and retired.

Buick, a brand long identified with large sedans that appeal to elderly buyers, last year began running digital advertisements with the statement "Yes, people with blue hair still drive Buicks" to change the brand's image. The ad wanted to portray a fun image based on shattering expectations among both young and old. In the past year that message has traveled from digital to television and back again.

iProspect has been testing campaigns in addressable television, which Sam Huston, chief strategy officer at iProspect, defines as direct messages -- because marketers can get pretty specific, even down to the neighborhood, when delivering the message. It's done largely through a set-top box. The agency has not done much with tying addressable television to search, which I believe is a huge missed opportunity.

"Tying mobile search and television has become incredibly important, and understanding the time of day to run both a television spot and online search campaign," Huston said. "We've seen a lot of success when the two work together, but we have not specifically tied that to addressable TV."

Personalizing the messages begins with understanding the consumer, Huston said. "Understand them as people, not just as consumers," he said. "Understand the culture in which they participate, along with the rituals and traditions they follow daily. There's lots of data to help us do that."

Know how these subsets of consumers use various forms of media, but also know their views on specific topics such as the environment, their family, and political issues. Semantic analysis tools analyzing social sites also can help marketers understand their customers. Following the conversation on a specific topic helps to understand the meaning behind the banter. In one case, after analysis on one social site, Huston's team learned the topic they followed was not as important to site members participating in the discussion as another barely mentioned topic.

Be sure to structure the data in a way that marketers can access and share it quickly. The one-to-one communication model most marketers hope to achieve isn't quite doable, yet, but today's technology comes pretty darn close, he said, because marketers can segment the target audience into pretty small buckets.

Make search and display audience data segments as small as possible when structuring the accounts. Limit the number of keywords groups to a handful in search, rather than thousands of keywords. This allows marketers to become much more specific in how they respond to people searching for those keywords.

Marketers using display and social must ensure that the sites on which the ads serve and the time are very specific to the message in the advertisement.

If you're running an addressable television campaign and tying it to search, send me a note.