The first television ad for the U.S. laun 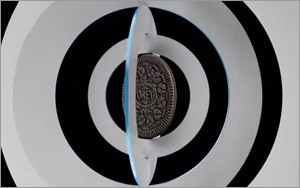 The creative — from The Martin Agency with animation by Amsterdam-based production company MediaMonks Films —dramatizes the thin, adult-targeted version of the iconic cookie by making it appear to spin around in 3D within free-floating rings.

The accompanying music combines chords from Richard Strauss's "Also sprach Zarathustra" (which will forever be associated with the famed opening sequence of "2001: a Space Odyssey") with snippets from The Martin Agency's "Wonderfilled" Oreo theme song —underlining the cheeky suggestion that the thinner Oreo (like today's increasingly thin communications devices) is a revolutionary development.

Tagline: "Oreo Thins — a thin new twist on the Oreo you love."

The spot has also been released in digital channels.

The Thins, which come in Golden and Mint flavors, as well as original, hit U.S. store shelves on July 13, after first being successfully launched in China.

In addition to the TV spot and an early-July "Thinvitation" sampling promotion on Oreo's social media channels, the major new product line will be featured in an upcoming video that "illustrates how the more sophisticated Oreo Thins gives the 'forgotten' pinky finger a new reason to be," the Mondelez International brand reports. That video will be accompanied by new etiquette rules about how to "properly" enjoy Thins, among other social efforts.

For the campaign, MediaVest, 360i and Weber Shandwick are handling media planning and buying, social media, and PR, respectively.