For all the talk of consumers being in control, th 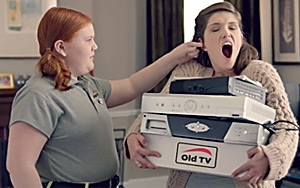 ere’s one place where they are still at the mercy of the companies in charge: pay television services.

OTT service Sling TV, however, is looking to change that with its first national advertising campaign that pits the pay-TV companies as childish bullies.

The effort, from San Francisco agency Camp + King, is aimed at millennials who -- according to Sling TV chief marketing officer Glenn Eisen -- are the demographic most likely to look for an OTT solution to the status-quo Pay TV model.

“Millennials still love TV. They just hate the model,” Eisen tells Marketing Daily. “They see the traditional model as absurd, and they don’t see why anyone would use it.”

One child accosts a man in a parking lot, pushing him against a car, demanding “Time to pay up, Larry.” Another sits on a man’s chest on a lawn, saying “You’ll pay for other channels and like it,” before shoving grass in the man’s mouth. Other scenarios include a bike gang to represent “strong arm tactics” and sarcastic kids working a customer service line. The campaign encourages consumers to “Take Back TV.”

“It really is about introducing a new Pay-TV model that addresses the pain points we’ve heard from this audience,” Eisen tells Marketing Daily. The overall “Take Back TV” message is also communicated through the company’s mission statement, which reads in part: “TV used to be great. But things have changed. Over time, the shows we loved became channels we never watch. Small bills became huge. Simple became complicated. We’ve been bundled, price-gouged, overburdened with rental equipment and insulted by terrible customer service.”

Having launched earlier this year (as a subsidiary of Dish TV), the campaign is coming as the service has gained momentum, luring enough networks (such as ESPN, AMC, A&E, TNT and Food Network) and services (such as HBOGo and news, sports and kids “Extra” packages) to entice customers with its value proposition, Eisen says. The summer launch also gives the company a foothold before the back-to-school and holiday seasons are fully underway.

“Now is the right time,” Eisen says. “We’ve hit certain internal triggers that tell us now is the time for TV [advertising]. It positions us for back-to-school and other opportunities to come.”

In addition to running on traditional television networks, the ads will run on Sling’s YouTube channel, digital and mobile networks and on social channels. The company is also hoping its social fans and followers will promote the campaign independently, Eisen says.

“We need to create a [campaign] that makes the brand assets viewable and sharable across platforms,” Eisen says. “You can’t think of targeting millennials and not take into account their [media] behaviors.”