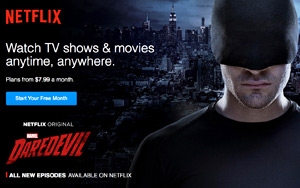 Giving a broader view of Netflix -- relative to the entire traditional pay TV market -- Netflix pulled in $3.4 billion in U.S. revenue in 2014. That’s a 3% share of the entire pay TV multichannel market -- $104.6 billion.

MoffettNathanson says that when looking at subscribers, in 2014 Netflix had 39 million versus 99 million for the entire pay TV marketplace -- a 40% share.

The research cites estimates from Craig Moffett, who says those 99 million U.S. pay TV homes pay on average $88 a month. By way of comparison, Netflix charges around $8.50 a month on average to its customers. That spells opportunity for Netflix.

MoffettNathanson says: “We would argue that given the massive amount of consumer spending in the U.S. on pay TV and the growing ubiquity of Netflix’s service, there is plenty of room for Netflix to run on pricing before hitting an upper ceiling.”