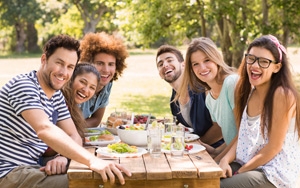 Connecting with consumers during their time of need has been Google's mantra for at least the past year. Will it rain? Where are the fireworks? How do I make the perfect hamburger? It doesn't only happen on a smartphone.

Holidays consist of celebratory moments that people share with friends and family. These times lift the spirit and make us happy. Data released Tuesday revealed that people become far more excited, happy, and confident on the July 4 holiday compared with an average day. Expect to see the same during the forthcoming Labor Day weekend.

Jim Spaeth, chief product officer at RealityMine, which supports tools for market research, said holidays are about socializing with family and friends, but the data shows consumers never leave out media. On July 4, RealityMine data shows a continuous stream of media use including mobile phone and tablet, television, radio, even landline phones. In fact, the most popular devices from 9 a.m. through noon took consumers from the television to radio to smartphone to tablet. From 1 p.m. to 7 p.m. media consumption transitioned from television to landline to smartphone and back to television.

"There are information needs such as Will it rain? Where are the fireworks? How do I make the perfect hamburger?" Spaeth said. "There are social needs like checking in with friends on social media, and calling grandma in Florida."

RealityMine data shows 61% of Americans spent the July 4, holiday at home, although 10% celebrated at someone else's home, and 7% spend their time away from home. During this family-oriented, social holiday, 24% of Americans spent the day with children, 27% with a partner. The remainder spent their time with other family members such as parents and siblings, as well as friends. About 72% journeyed by car, either locally or out of town, to meet up with others.

Holidays also are about eating and drinking. Spaeth found this result to be the most surprising. "These gatherings are never about culinary excellence, they are about nostalgia, or maybe just habit and meeting expectations," he said. "On the fourth of July people searched for 'classic 4th July food.'  When we studied the Super Bowl, people said they wanted to make 'the usual Super Bowl food.'"

Finally, the most common search terms during the fourth of July across Google and Bing were fireworks, classic 4th july food, independence day USA, which 2 presidents dies the same day july 4 1826, which US President was born 4th july, fourth of july quotes, frilled food recipes, fourth of july American and confederate flags, and what stores open on july 4th.

The data focused on the fourth of July, but American holidays, such as Labor Day, seem to have several things in common. They have rituals based on family, friends, happiness, and socializing.

"There are numerous opportunities for brands to become part of the annual routine and build a sustainable franchise around each holiday," Spaeth said. "First you have to understand how consumers live each holiday and where you might be able to find your place in their lives. Then you need to work out how media selection and advertising messaging can win that place for you."