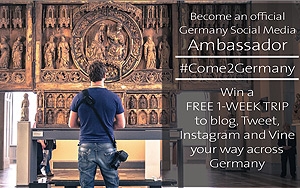 More than 20 million visitors traveled to Germany between January and April 2015, up 4.3% year-over-year, according to the Germany's Federal Statistical Office. Yet, these tourists largely hailed from Europe, China, Brazil, and Australia and not the U.S.

The initiative launches with creative invitations serving as a call-to-action to attract bloggers. Potential Ambassadors will be chosen based on the amount of votes they can receive from their social following. Each blogger “participant” will be allowed one entry within the first two weeks of the program and voting begins at the start of the program and will end after 30 days.

Then, two bloggers with the most votes at the end will be awarded an all-inclusive trip to Germany to create and distribute social media content based on their area of interest and their experiences throughout the trip. They will document these experiences by creating multiple multimedia posts per day, ranging from texts to images to video.This content will then be re-shared by Germany Tourism’s social-media accounts.

After the initial wave of content, Fuseideas will redistribute the content in the form of infographics, video montage, photo collages and memes throughout the end of the year.

This is Fuseideas first assignment for the GNTO.