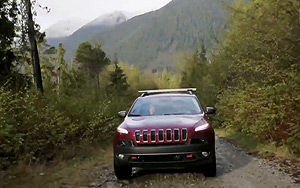 Most of the United States, at least the parts where most SUVs are sold, is not exactly nestled among the hardwoods in the wild green yonder. That is why SUV ads these days focus their message on the urban lifestyle. Even Jeep does that.

Canada’s different. Even Toronto, with its 2.5 million people, is a half-day drive from real, honest-to-God Ontario wilderness. And there's the rest of Canada, where falling trees make a sound only because wild animals hear them fall. And, of course, it's a place where winter weather makes some kind of rough-road capability mandatory.

Thus, advertising SUVs up there as off-road vehicles for adventurers actually makes sense, beyond necessity of sustaining brand mythology: even if you live in the wilds of Toronto you probably need, at the very least, all-wheel-drive.

So it makes sense for Jeep to talk about the great outdoors and brush up on its Rubicon-capable message. And the automaker's Canada division is doing just that through a partnership with Discovery and Bell Media.

Central to the campaign is an online series called “Life is Calling.” The eight-episode, program rolls out as a once-per-week episode. Featuring the Jeep Cherokee and the 2016 Jeep Renegade, the series follows hosts Roberto and Bella Gibbons, known as “The Expeditioners,” as they drive one or the other of the vehicles to different wilderness locations in the Great North.

In the first episode, the two drive a Renegade into the remote fastnesses of Tofino, B.C., at the far side of Vancouver Island, pretty much the back end of nowhere between mountains and sea.

The branded-content campaign will include previews on news broadcasts, social media channels and via digital ads. The campaign will also get promotional mileage on Discovery's Canada site and on Bell Media websites, and French stations, with messages driving consumers to the digital host sites. It includes a promotion offering a 2015 Jeep Cherokee or the new Renegade. There are also weekly prizes.

In both English and French, the effort represents a first-time partnership by the automaker with both Discovery and Bell. The latter delivers Discovery content through its channels. The conglomerate owns some 30 local television stations; 35 specialty channels; and four pay TV services, including The Movie Network and Super Écran. Bell Media says it is also Canada’s largest radio broadcaster, with 106 licensed radio stations in 54 markets.

Fiat Chrysler Automobile had a knockout sales month in Canada in June, posting its best sales volume there since 1985 with 27,217 vehicles sold, up one percent versus the month last year. The company in Canada posted June sales records for both Jeep and Ram.

Jeep sold 6,931 vehicles in the country, the 16th month of consecutive year-over year sales gains for the brand, per FCA.