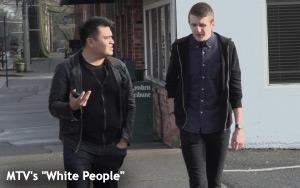 If you don’t mind wasting an hour of your life Wednesday night, then do I have a show for you!

It’s an MTV “documentary” (to apply the term loosely) that purports to penetrate and understand issues of race as seen through the eyes of young Americans -- i.e., millennials. To say that it fails to achieve this goal is an understatement.

This MTV special is titled “White People,” which, on that basis alone has drawn the attention of other media such as Fox News Channel, where it has already been talked about sight unseen.

And it’s probably true that this deceptively simple title was designed for its potential to provoke. Some people will hear about this documentary called “White People” -- produced and directed by a journalist and self-described immigration activist named Jose Antonio Vargas -- and immediately assume it’s been designed to make “white people” feel guilty for the color of their skin.

For the most part, those making that assumption would be correct. For example, the phrase “white privilege” is tossed around in “White People” as if it’s a concept to be assumed right up front and not up for debate.

However, I am sure that if this “filmmaker” would have looked a little harder, he may have found plenty of white people who don’t feel very privileged at all. But that would have gone against the preconceived thesis of this documentary, which is that all white Americans enjoy special privileges that are not accessible to everybody else. Here in the real world, however, this doesn’t happen to be true.

The documentary goes on to discover that white Americans see the world – or more to the point, the United States – differently than African-Americans, Asian-Americans and Latin-Americans. Well, duh: People have different experiences based on their upbringing, family backgrounds and traditions, and geographic locations. Ergo, they will see things differently than other people will.

For this documentary, Vargas traveled to some pretty remote places in the U.S. to interview young people on the subject of race. The majority of the interview subjects are white, and they sometimes express a degree of perplexity when it comes to considerations of race. Why? Because some of these locations are small towns where, apparently, members of various minority groups such as blacks, for example, never got around to establishing communities. Therefore – surprise, surprise – the white people there don’t think about them very much.

Nor do they seem to possess any animus toward these other groups in the first place, whether they actually know members of these groups or not.

Some of the interview subjects in the film do express reservations about race when they are asked a leading question on the subject -- a question such as this one: “What does white privilege mean to you?”

“You kind of get this feeling as you grow up that things belong to you,” answers one young white woman.

Says another young white person: “I can walk to the convenience store and back without being hassled by police.” Fair enough, I suppose, since some black men do feel unnecessarily “hassled” by police these days when out on routine errands.

“I’ve never experienced systematic oppression against me,” says another young white woman, in one of the more illuminating statements heard in the documentary. Her answer comes across like a rote recitation of something she absorbed in a modern-day college lecture hall.

In the documentary, these answers are never questioned or otherwise examined. So what if one young woman feels that “things belong” to her because she’s white? The implication is that this “feeling” is widespread among white-Americans. But no evidence is provided to support the idea that other white people feel the same way.

It’s like another part of the documentary in which a young Asian-American complains that he thinks whites believe he and his family eat dogs or something. But at no point in the documentary does any white person come forward and state this. At such points, you want to shout: Where’s the evidence? Sadly, there is none.

At little more than 40 minutes in actual length (the hour itself includes nearly 20 minutes of commercials), “White People” doesn’t come anywhere close to plumbing the depths of race relations and perceptions in America. Instead, it’s just shallow and unpersuasive.