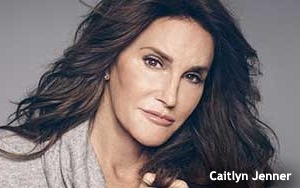 “I Am Cait” might turn out to be the Kardashians’ worst nightmare -- a show whose star was once a supporting player in their world but who is now attracting even more attention than they are.

In this new, eight-episode reality series premiering Sunday night (July 26) on E!, Caitlyn Jenner continues her year-long transformation from a he to a she.

In the premiere -- which I had a chance to watch along with other journalists at a screening this week in New York -- some (but not all) of the Kardashians are seen getting with the program and turning up for Caitlyn’s reality-TV debut.

In the show, visits to Caitlyn’s Malibu home by Kim Kardashian (along with husband Kanye West) and her younger half-sisters Kendall and Kylie (technically, they’re Jenners, not Kardashians) are billed as their first-ever introductions to Caitlyn -- who happens to be their father in full female hair, dress and makeup.

How do they feel when they first get a look at her? That’s hard to say, since they show little emotion other than to offer her hugs and utter banal words of approval over her hair and wardrobe choices. As reality-TV pros, they’re clearly conscious of the cameras and well aware that their “roles” here are to act supportive, and they succeed.

Not seen at all in this one-hour premiere are Kim’s sisters Kourtney and Khloe and brother Rob Kardashian (although his voice is heard on a phone wishing Caitlyn well). Also absent, not surprisingly, is estranged wife Kris Jenner. After Caitlyn, she’s the most fascinating figure in this whole transformation saga because she was married to the now-former Bruce Jenner for 24 years. Also missing from Episode 1 of “I Am Cait” are Caitlyn’s children from his previous marriages.

Whether or not these other Jenners and Kardashians ever decide to climb aboard the Caitlyn bandwagon (which some have dubbed “the Trans-American Express”) remains an open question that may or may not be answered in the weeks and episodes ahead.

The premiere episode of “I Am Cait” is devoted more to the members of Jenner’s biological family -- sisters Pam and Lisa, and mom Esther -- three people who knew Bruce the longest and are now getting to know Caitlyn. The three of them also visit Caitlyn’s home, which is situated atop a bluff overlooking the Pacific.

Sister Pam bonds with new sis Caitlyn over a game of tennis. Lisa’s reaction to the whole thing is difficult to determine. Mom Esther struggles with her son’s transformation into a daughter. But in the end, she declares that she’s prouder of her son now than she was when he won a gold medal at the 1976 Olympics in the decathlon.

As for Caitlyn herself, she takes some getting used to. She’s 6’2” and still has a man’s physical presence, most notably in the ungainly way she walks. She has hands like a man too (leading someone at the screening to make a discreet joke about “man-hands,” a reference to a classic episode of “Seinfeld”).

As with Caitlyn’s other media appearances this year -- most notably the Diane Sawyer interview that aired in April and then Caitlyn’s acceptance of a courage award at the ESPYs earlier this month -- much of the emphasis in the premiere episode of “I Am Cait” was on the plight of others -- particularly teens -- who struggle with their gender identities.

At one point, Caitlyn even revealed that during her life as Bruce there were times when she was so despondent that she contemplated suicide, particularly when she was home alone and had access to a handgun.

In this Sunday’s episode of “I Am Cait,” Caitlyn visits the family of a transgender teen who committed suicide. “We don’t want people dying over this,” Caitlyn says in the show. “Living my true identity and hopefully making a difference in the world -- that is my mission,” she says.

And the journey of Caitlyn Jenner’s Trans-American Express continues.

“I Am Cait” premieres Sunday (July 26) at 8 p.m. Eastern on E! Entertainment Television.