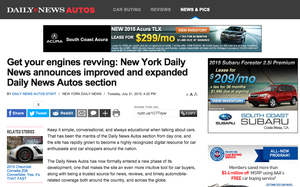 There is a new voice in automotive media, courtesy of an iconic American tabloid. The New York Daily Newsannounced the launch of Daily News Autos, a digital content hub and resource for consumers in the market for a new car and auto enthusiasts.

NYDN has entered into a strategic partnership with Hearst’s Jumpstart Automotive Group, giving the latter responsibility for advertising on the site and related apps.

Content includes reviews, research and car buying guides, as well as breaking news and other features. The site’s core car search function will allow consumers across the country to find the best deals on popular vehicles across local and regional markets; it will also offer in-depth features and automotive entertainment content skewing towards enthusiasts.

The partnership with Jumpstart will give Daily News Autos access to major automotive clients that already have advertising relationships with Jumpstart publications and affiliated sites in its online network, including Car & Driver, CarSoup.com, U.S. News and World Report Automotive and J.D. Power Autos, among others.

The launch of the new auto vertical follows reports in February that longtime owner Mortimer Zuckerman is considering selling the tabloid, with a rumored asking price of $200 million. However, these negotiations don’t appear to have yielded any results to date.

Like its archrival the New York Post, the NYDN has moved to reinvent itself for the digital media age amid continuing declines in print circulation. Over the last decade, the print newspaper’s total average weekday circulation declined from 715,052 during the six-month period ending September 2004 to 281,907 in 2014, for a 60% decline over this period. The NYP’s weekday print circ fell from 686,702 to 259,482, a 62% drop.