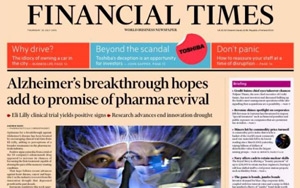 Pearson PLC has sold the FT Groups, which publishes the Financial Times, to Japanese newspaper publisher Nikkei Inc. for around £844 million, or just over $1.3 billion, the FT reported today.

The deal also includes smaller publications like The Banker and Investment Chronicle, but does not include The Economist Group, publisher of the magazine of the same name, in which Pearson owns a 50% stake.

The FT began publishing in 1888 and was acquired by Pearson in 1957. The latest sale took many media industry watchers by surprise, as Nikkei’s last-minute offer sidelined German publisher Axel Springer, widely viewed as the likely buyer recently.

Nikkei is the publisher of The Nikkei, Japan’s biggest business newspaper, with a subscriber base of over 3.1 million.

According to the FT, both Nikkei and Axel Springer both want to increase their presence in English-language markets. Axel Springer had been in talks with Pearson for over a year, but their bid was upended by Nikkei’s unexpected entry five weeks ago and negotiations continued almost literally to the last minute, with the German publisher finding out its bid was rejected only fifteen minutes before Pearson announced the sale to Nikkei.

Known for its detailed business reporting, moderate political views and iconic salmon-colored print edition, FT has more recently distinguished itself as a trailblazer in online publishing strategies, and particularly in monetizing digital circulation to offset declines in print advertising revenues.

Last year, digital subscriptions made up 70% of FT’s total circulation of 720,000, and the newspaper recently moved to limit free access to its online product even more.

The deal will allow Pearson to focus on its education business, which already accounted for around three-quarters of the global information publisher’s global business. The Washington Post Company made a similar move in 2013 with the sale of its flagship newspaper to Amazon founder Jeff Bezos, allowing the rest of the company (renamed Graham Holdings) to focus on its Kaplan educational testing business, among other businesses.