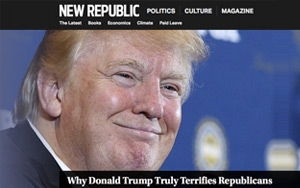 The New Republic is getting into the native advertising business with the launch of a new in-house content marketing agency called Novel.

The new division will help brands highlight their commitment to causes and missions to produce long-term branded content campaigns aligned with The New Republic’s own progressive ethos.

Heading up the new in-house agency are chief revenue officer Kavyan Salmanpour, who previously served as vice president of content marketing platform NewsCred, and Amelia Pisapia, who served as editorial head at NewsCred.

Pisapia has produced branded content marketing campaigns for clients including SAP, Diageo, Kimerbly-Clark, Pepsi, and Discover. The New Republic is also adding Andrew Essex, formerly vice chairman of Droga5, to its advisory board, where he will focus on Novel.

In announcing the launch of Novel, The New Republic emphasized that all of the agency’s projects will be kept separate from the magazine’s editorial team, meaning that journalists will not be involved in producing commercial content.

The launch of the new in-house agency comes less than a year after the magazine’s highly publicized editorial meltdown in December 2014, when dozens of editorial staff resigned in protest over the decision of owner Chris Hughes, the Facebook cofounder and billionaire who bought the magazine in 2012, to dump lead editors Franklin Foer and Leon Wiseltier as part of a wider digital makeover of the magazine.

Other magazine publishers have been tapping into the native ad trend by buying or creating in-house branded content agencies and studios.

In January, Condé Nast launched 23 Stories, a new branded content studio that will help its advertising clients engage consumers, especially in the coveted millennial demographic, by tapping into the expertise of the publisher’s own editorial teams.

The studio draws on editorial talent from across the Media Group, as well as production know-how from Condé Nast Entertainment. Also in January, women’s interest publisher Meredith Corp. acquired Selectable Media, which specializes in native advertising.

In February, Billboard and The Hollywood Reporter unveiled Adapt Studios, a branded content division that will help brands reach consumers in entertainment and music contexts.