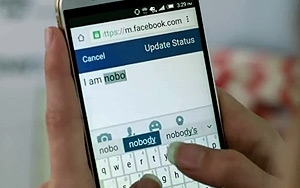 Social media often focuses too much on the negative, with drought shaming, cyberbullying, and hacking threats.

Now, Taiwan-based mobile brand HTC and its agency Butler, Shine, Stern & Partners (BSSP) want to show how social media can be more uplifting with its new "Rally for Michelle" campaign.

The cornerstone of the campaign is a film that reveals how being connected through devices and channels can make a bad day a good day. A sad "Michelle" posts her heartfelt feelings to her social media feed, noting “I am nobody.” Her message resonates with her friends who respond quickly through their social networks with encouraging words, cheers of support -- even an invitation to the prom.

Here is a link to the film.

There's no specific reason why the agency selected “Michelle” as the campaign's spokesperson. They just felt it was a popular name.

“This film takes on the pre-conceived notion of social channels as negative and disruptive and elevates the conversation to show the importance of human empathy and connectiveness,” said Idris Mootee, CMO of HTC. “The need for acceptance and support is universal, and this spot tells a story that will resonate with our audiences around the world. Brands are comprehending the power of stories to transform their purpose, presence and identity…and this is another step of HTC’s brand journey.”

The concept examined how HTC's target audience of young adults is using social media and how they live their lives out loud through their phones. The agency thought it would be more relevant to the audience and the times to focus on the positive sides of social media and how it can support those in need. "We thought at a time when there is so much focus on the negative impact of social media, a look at how it can help might just be uplifting," say BSSP executives.

“Our age of mobility is more than high design and product features. To HTC it is about the ability to bring people together,” explained John Butler, ECD at BSSP. “This spot establishes a distinct voice for HTC as a brand that really cares about how its products can have a positive impact on people.”