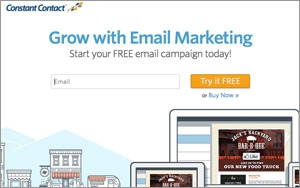 Closing Thursday with share prices at $29.53, after the announcement the stocks’ value dropped sharply today to $24.80 at press time.

They adjusted total revenue down from $377 million to $373 million

The mixed results come after a period of high investor expectations. Based on recent partnerships with Web.com and Endurance International Group, some analysts argue that the stabilizing effects of these partnerships haven’t become apparent yet.

Based on the company’s lower projections for the third quarter, Oppenheimer downgraded the company from an ‘outperform’ to a ‘perform’ and The Street’s ratings team gave them a C+, recommending investors hold.

Constant Contact added 50,000 new customers in the second quarter, ending with 650,000 unique customers, an increase from 645,000 unique customers at the end of the first quarter of 2015, and up from 615,000 this time last year. They expect those numbers to grow with help from their new partnerships.

The company also plans to fund a $50 million share repurchasing program from its cash and cash equivalents through July 2016.