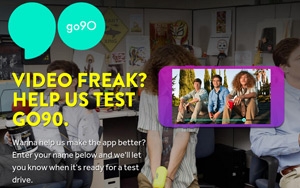 “Go90?” Yeah, well, I don’t get the clunky product name either, but that apparently is what Verizon has named its upcoming OTT video streaming service for mobile devices. According to Variety, the new owner of AOL will leverage that company’s content and ad platform to make Go90 a free (at first) video portal that will include full TV episodes as well as familiar OTT streams from Vevo, GoPro and the like. Go90 will be available in a downloadable iOS and Android app, but some content will be available only to Verizon customers.

In an interesting characterization of old media, the site calls traditional TV “an appliance you rearrange your living room around.” Go90 will be designed from the ground up as a mobile-first experience: “no cord required.” The service will include the ability to share clips from longer-form video, which the app dubs “Moments.”

Verizon is poised to enter an OTT video market that will not lack players. Comcast recently launched its “Stream” video service to appeal to broadband-only customers. Premium cable brands like HBO, Showtime and other are offering their slate of otherwise cable/satellite-dependent programming via apps. Hulu is rumored to be considering an ad-supported app and OTT version of its service. Netflix, Hulu and Amazon are going head to head over original series programming and exclusives for their respective services. And of course, Apple’s long-awaited revision to its Apple TV tech and service is supposed to include unprecedented live streaming deals that purportedly break the traditional bundle model.