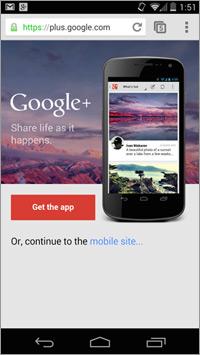 Google will permanently remove mobile app interstitials in Google+ that ask users if they want to "get the app" based on a recent study it ran showing the disruption the ads cause consumers while using a mobile app. Perhaps paid-search or organic listings will become the answer.

Mobile users despise interstitials, the full-screen ads that typically cover the interface of their host app. They create a pause between two functions and interrupt the pace, becoming distracting and slow. Google had been a huge proponent of interactive interstitial ads, but not anymore.

Before making the decision to stop using the ad unit within the Google+ app, the group decided to analyze interstitial ads and found that only 9% of visitors click on the "get app" button, while 69% of the users who encountered one abandoned the page completely without going to the app store or continuing to the mobile Web site.

The focus turned toward the number of users abandoning Google's product. So it added a Smart App Banner to promote the native app in a less intrusive way, as recommended in the Avoid common mistakes section of its Mobile SEO Guide.

Then Google decided to run a follow-up experiment in July 2014, to see how removing the interstitial from the Google+ app would affect actual product use. A Smart App Banner was added to continue promoting the native app in a less intrusive way. One-day active users on its mobile Web site rose by 17%, while Google+ iOS native app installations fell 2%.

The study determines that interstitials don't work within the Google+ app and that the same call to action is more effectively presented as a mobile banner at the top of the page.

Perhaps brands should turn to search ads, according to findings from Google and Ipsos completed in May 2015, after surveying 8,470 people with smartphones who had used apps in the previous week.

Search is a major source for app discovery, according to the research. In fact, one in four app users discover an app through search. Some 26% of people searching for local apps, compared with 59% for tech and 30% for travel, are more likely than the average person to use search to find the apps. While some find apps through search engine queries, 40% of smartphone users search for apps in app stores.

"People not only turn to search to find new apps; they actually download apps because of search ads," according to the report. "They're among the most effective ad formats for driving app downloads."

Of those who downloaded an app based on an ad viewed on their smartphone, 50% said they were prompted to do so by a search ad.