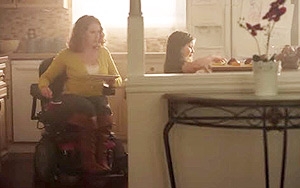 Honey Maid continues to expand its much-noted "This Is Wholesome" campaign, celebrating families of all kinds.

The latest ad in the campaign, from Droga5, shows an adult woman guiding a little girl in making a snack with Honey Maid crackers (apple and cheddar melts). Toward the end of the spot, the viewer sees that the woman is in a wheelchair, as she pulls the snack from a microwave.

Although the relationship of the pair is not clear in the video, Mondelez International reports that the woman is Stephanie Woodward, a disability rights lawyer who is also director of advocacy at The Center for Disability Rights, and that the little girl is her niece.

The creative was timed to coincide with the 25th anniversary of the Americans with Disabilities Act on July 26.

Mondelez also reports that the TV ad is one of the first to include audio descriptions for blind and low-vision audiences, as well as standard closed captioning.

Launched last fall, "This Is Wholesome" has to date included more than a dozen TV spots and videos (see YouTube playlist) featuring families that would once have been considered unconventional, including a single-parent family, divorced but amicable families, families of mixed race, a family with a punk rocker dad, and a family with same-sex parents.