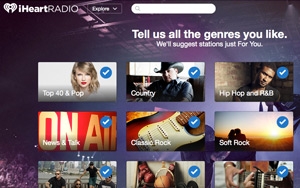 Another big media company is opening up shop on Snapchat’s new Discover service.

Users can add the iHeartRadio Discover channel by scanning a Snapcode or navigating to the Snapchat Discover menu.

According to a May interview with Snapchat founder Evan Spiegel by Bloomberg, the social messaging service plans to ramp up its advertising efforts in Discover as part of a larger move to monetize traffic more effectively.

Discover is not the only option for mainstream media and brands looking to boost their exposure with Snapchat.

Also in May, Major League Baseball struck an agreement with Snapchat to contribute video, as well as user-generated baseball content, to Snapchat’s “Our Stories” feature, with a series of weekly stories called “MLB Wednesdays.”

Other professional sports leagues have also begun posting content on Snapchat, including the NFL, NBA, and NHL.