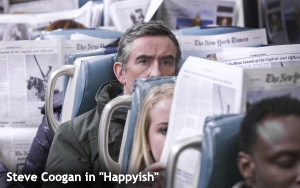 Showtime’s ad-industry comedy “Happyish” won't be back for a second season, but it wasn’t the show’s subject matter that doomed it.

The news made the rounds on Friday: Showtime has canceled “Happyish” after one season -- an unusually short run for a series on pay cable.

The cancellation means the episode that aired June 28 -- the tenth and final episode of the show’s first (and now only) season -- was the series’ last. The reports cite the usual suspect, low viewership, as the reason “Happyish” was discontinued.

In and of itself, the subject of “Happyish” -- the changes sweeping through the advertising business and one 44-year-old ad veteran’s reaction to them -- was a perfectly legitimate topic for an adult TV comedy series.

The problem with “Happyish” had more to do with other elements -- particularly the loathsome characters it presented -- than its examination about how young whippersnappers preaching the gospel of social media and making everyone over the age of 29 feel irrelevant -- are taking over the ad industry.

Whether or not that’s an accurate representation of the ad business today (and I suspect it is at least somewhat of an over-exaggeration) remains an open question. But it could have been made to work if the characters in “Happyish” had been more palatable.

This was a show whose episodes were only 30 minutes, but it wasn’t easy to spend even that short amount of time once a week with the show’s whining protagonist Thom Payne (played by Steve Coogan) and his unglued wife (played by Kathryn Hahn).

The wife character was particularly atrocious -- an f-word spewing, ill-tempered shrew whose appearances on screen were what you might call the opposite of clickbait -- “unclickbait,” which in TV parlance means “change the channel to something else as fast as you can.”

If “Happyish” proved anything, it’s that it’s possible -- even in today’s permissive environment -- for TV writers to go too far with the casual tossing around of f-words and other language meant to identify characters as “modern” types for whom salty (to say the least) language is no big deal. Emanating from the mouths of the “Happyish” characters, however, the language often felt gratuitous. A viewer watching this show at home was made to feel bombarded by people most of us would cross a street to avoid.

The problems with Thom Payne start with this name -- a variation on Tom Paine, eighteenth-century author of “Common Sense,” a moniker that was supposed to signal the modern-day Payne as a source of “common sense” in the face of a communications (and advertising and marketing) revolution that didn’t make sense to him.

Instead, the character was just a pain in the you-know-what. Moreover, hanging the name Thom Payne on him was an example of this show’s irritating intellectual pretension. Whether many viewers of “Happyish” were aware of this or not, each episode carried a title that name-dropped various historical figures or noted institutions (or something like that) – from The New York Times to Josef Stalin.

For example, there was Episode 1, which was titled “Starring Samuel Beckett, Albert Camus and Alois Alzheimers.” Or Episode 7: “Starring David Ogilvy, Anton Chekhov and Lady Liberty.” Or how about this -- Episode 3: “Starring Vladimir Nabokov, Hippocrates and God.” The titles make you want to shout, perhaps to God: “Please! Make them stop!”

By a happy-ish coincidence, “Happyish” arrived on Showtime during the final seven-episode run of “Mad Men” on AMC, which made comparisons between the two more or less inevitable, since both shows were about the advertising business, but in eras that were far different. “Mad Men” depicted the advertising industry of the long-lost ’60s, when men such as Don Draper didn’t necessarily feel threatened by younger personnel (and if they did feel threatened, they just squashed their younger colleagues’ hopes and dreams) and “Happyish” portrayed the modern-day business as a place in which the opposite is true -- older people feel threatened and cannot do a thing about it.

But the comparisons really end there. “Mad Men” represented a level of craft in the production of a TV series that’s rare in television. Talk about “viewability”: Even when “Mad Men” was dull and talky, it was at least a pleasure to look at

The opposite was true here too: “Happyish” was not a pleasure to look at or listen to. And if it had something to say about the state of advertising, few of us stuck around long enough to hear it.