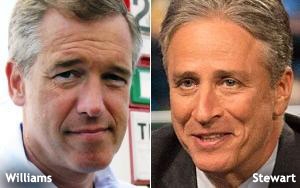 To be specific, it was an action-packed week back in February -- the week of Feb. 9-13 -- when Jon Stewart surprised us all by announcing he would call it quits this summer and, at around the same time, NBC was sentencing wayward news anchor Brian Williams to a six-month suspension without pay following his infamous tall-tale scandal.

Well, here we are on the threshold of August and both of these legendary newsmen are poised to make headlines in the same month yet again. (I know I just casually described Stewart as a “legendary newsman” and then just let it sit there. I promise you more on that farther down.)

Stewart will soon leave. And Williams will return, but in what appears on the surface to be a diminished role at NBC News.

On the other hand, the relative significance of Williams' new role -- “breaking news” anchor on MSNBC -- depends on what NBC News brass under division chief Andy Lack has in store for MSNBC. The rumors are that the low-rated cable channel will jettison a chunk of its talk shows (particularly the ones that air in the daytime) in favor of a harder news approach that will position the network as more of a cable adjunct of NBC News, instead of a destination for liberal talk shows that few people watch.

If MSNBC adopts a hard-news approach, then Williams might be resurrected as a very visible national news anchor once again. My advice: Keep him away from the late-night comedy shows or, for that matter, any environment where he might be tempted to go off-script again and tell stories embellishing his experiences covering various hot spots. The fact is, despite the New York Post's insistence on calling him “Lyin’ Brian” in every story the paper publishes about him, he stands a reasonable chance of resurrecting himself in the court of public opinion. Just look at A-Rod.

Speaking of late-night comedy, just in case you have not yet marked your calendar (do people still “mark calendars”?), Jon Stewart's last show as host of “The Daily Show” on Comedy Central is next Thursday, Aug. 6.

His final four shows (next Monday through Thursday) will be closely watched and widely covered, especially his finale. Pundits will write about Stewart's contributions to the culture, particularly how he melded news and comedy until the two became indistinguishable, at least to his target audience of younger viewers and core followers who were said to have adopted “The Daily Show” as their principal source of nightly “news.”

The same was once said of Jay Leno's monologues on “The Tonight Show.” And it was true, to a degree: If you had not checked in on any news Web sites, watched any TV newscasts or tuned into any news on the radio that day, then it was highly likely that the first time you may have heard the day's headlines would have been during a setup for a late-night monologue joke.

Stewart's “Daily Show” went even further -- styling his show like a newscast in which he, as “news anchor,” presented news stories and then rolled his eyes over them, both literally and figuratively. So not only would viewers learn the day’s news (or at least a fraction of it), but they would then have an opportunity to form an opinion about the news based on Stewart's reactions. And since he was so funny and entertaining, it was easy to agree with Stewart's take -- which is why he emerged as such an influential opinion leader.

Airing opinions or otherwise revealing one's reaction to news stories is a privilege enjoyed by comedians -- not news anchors. “Real” newsmen are supposed to report the news without inflections that reveal how they personally feel about it.

Before his career was derailed by scandal (at least temporarily), Williams seemed hopeful of breaking out of TV news and breaking into the comedy business. He apparently loved appearing on late-night comedy shows so much that he was rumored to have explored the idea of promoting himself as a possible replacement for either Leno or David Letterman.

Now he is due to return to TV in a hard-news capacity that will hopefully leave him little room for either commentary or comedy. And that's a good thing. My advice (given here for the second time in this blog post, and not solicited by Williams or anybody else): Leave the comedy to the late-night comedians.