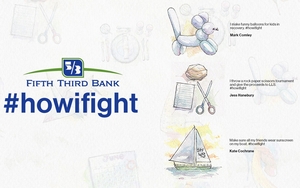 Fifth Third Bank is partnering with actor Patrick Dempsey for a promotion that allows new bank customers to contribute toward cancer research efforts when they open a checking account.

The Cincinnati-based company will support Stand Up To Cancer (SU2C) in the promotion, at 53.com/howifight.

The bank will give $150 to customers and another $150 to SU2C when customers open the Essential Checking Account with direct deposit, and make three online bill payments. Fifth Third also will donate $1 to SU2C when people share eligible posts using the #howifight hashtag on Twitter, Facebook, Instagram and Vine, up to $100,000 during the campaign.

Dempsey will be featured in a Fifth Third Bank and Stand Up To Cancer spot highlighting ways people can fight cancer. The campaign runs through Oct. 17.

The effort follows the national trend of companies giving customers ways to give back as they shop or do business. In the past two years, Fifth Third has participated in various marketing campaigns that have generated $4.2 million to SU2C.

“With cancer impacting so many, we asked ourselves, ‘Could a bank help in the fight against this disease?’ ” says Maria Veltre, senior vice president and chief marketing officer for Fifth Third Bank, in a release. “That was more than two years ago, and we’ve proven since that we can make a difference with the help of our customers, employees and members of our communities….With this campaign we want to highlight all the ways that we help fight every day.”

Stand Up To Cancer, a program of the Entertainment Industry Foundation, a non-profit organization, is an initiative that raises funds to accelerate innovative cancer research, enabling scientific collaboration in order to get new therapies to patients quickly.

Fifth Third began working with SU2C in 2013 when the Bank introduced its Fifth Third SU2C debit and credit cards, which raise funds to support SU2C research through every qualifying purchase made using those cards. Fifth Third Bank is the only card issuer to offer the SU2C payment cards.