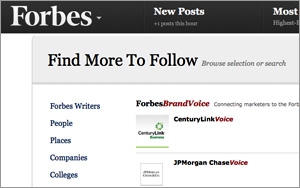 The new feature, which debuts with Dell as a launch client, gives advertising clients access to all the production tools at the disposal of Forbes’ editorial staff.

Advertisers that buy BrandVoice Special Features pages can add and combine up to 10 different elements including posts, video, infographics, interactive elements and photo galleries, according to Forbes. Dell’s inaugural Special Features page, titled “1 in 7 Billion,” focuses on the impact of growing computing power on the fields of genomics and healthcare, in order to highlight Dell’s cloud computing products.

The campaign will run for eight weeks and is part of Dell’s larger “Future Ready” campaign. BrandVoice Special Features require an ad commitment of $100,000 per month for a minimum of two months.

This is the latest in a series of new offering introduced by Forbes for its core BrandVoice service. In April, the business news publisher introduced “Pulse,” which helps marketers incorporate visual and interactive storytelling into campaigns appearing on the site.

Each campaign executed with Pulse includes a custom-designed page on Forbes.com, linked to content ads on the Web site as well as in the print magazine. Pulse has a minimum price point of $300,000.

According to the publisher, 30% of Forbes’ total advertising revenues were derived from BrandVoice in 2014. Digital ad revenues now make up 70% of the company’s total ad revenues.