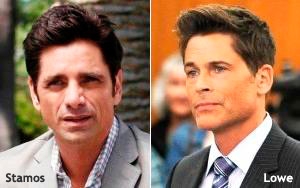 The scheduling of Fox’s new Tuesday-night comedies this fall might represent a “first” in the annals of prime-time programming.

I cannot remember any other instance in which two sitcoms were paired in the same hour on a prime-time network schedule because they each featured leading men who were ridiculously handsome.

Thus, Fox has set up a Tuesday night lineup that will have John Stamos leading into Rob Lowe. One would assume that this configuration is designed to attract female viewers, although heaven only knows if these two -- handsome though they might be -- will succeed in drawing female audiences simply because of the way they look.

Moreover, Stamos and Lowe are both 51 (Stamos will be 52 by the time his show premieres in September). They are certainly a departure from the two female stars who previously anchored Fox’s Tuesday night comedy lineup -- Zooey Deschanel, 35 (“New Girl”) and Mindy Kaling, 36 (“The Mindy Project”). They were supposed to attract young viewers -- particularly women -- but that apparently didn’t work.

The bigger question is: Other than having attractive leading men, are these new Tuesday comedies any good? I’ve watched the pilots, and I have an opinion on that.

But before I go any further, please let me emphasize the following: This blog post is in no way to be construed by anyone -- either readers or Fox publicists -- as a review of these two new sitcoms, “Grandfathered” (the one starring John Stamos) and “The Grinder” (the one with Rob Lowe). Every summer, the networks generously provide us TV scribes with access -- either on DVDs or online -- to the new fall pilots, presumably to liven up our summer and also to allow us to familiarize ourselves with the new shows they will be introducing in the fall. But the networks ask that we not really review these pilots because they are often subject to change -- reshoots, recastings and the like.

However, this arrangement does not necessarily preclude a TV columnist from forming opinions or impressions, just so long as his or her readers realize these opinions are not the final word on these shows. Where “Grandfathered” and “The Grinder” are concerned, the news is good: There was much to like in the pilots I watched a few days ago.

In “Grandfathered,” Stamos plays a confirmed bachelor -- a self-involved man about town (the “town” is L.A.) who owns a high-profile restaurant where he roams from table to table chatting up and hopefully charming his well-heeled clientele, including various celebrities (Deion Sanders, Don Rickles and Lil Wayne have cameos in the pilot). The premise is this: In the pilot, a young man shows up who informs the Stamos character -- a man named Jimmy -- that he is his son. This 20-something son even has a baby daughter, which means Jimmy is a grandfather.

So Jimmy the confirmed bachelor suddenly finds himself with a family. That’s the “situation.” As for the comedy, there was just enough of that for this pilot to come out “on the winning side of things,” I wrote in my notes. I look forward to watching the fall premiere (whether it changes or not) and future episodes.

In the other show, “The Grinder,” Lowe plays the title character, the “Grinder” -- who was a character that the Lowe character played on a very popular (and fictional) TV series.

Follow me so far? Stay with this because it’s worth it. In the Fox series, this TV actor’s fictional series, “The Grinder,” has come to an end. In it, the “Grinder” was a hard-charging lawyer who won all his cases with a flamboyance not necessarily seen in real-life courtrooms. But now that his show is over, the Lowe character is trying to figure out what he’ll do next in this life.

So in the pilot of “The Grinder” (the Fox sitcom), he decides to become a real-life lawyer -- like his brother (played by Fred Savage) and his father (played by William Devane), who are partners in a family-owned firm in Idaho. But the Lowe character has no intention of attending law school or otherwise pursuing a legal education. Instead, he simply means to apply everything he learned, and did, as a swashbuckling TV lawyer to real-life cases.

In the pilot, the results are hilarious. Lowe is a big reason for this because of his charisma, and his abilities as a comic actor. Savage and Devane are just as good too, leading to two big thumbs-up for “The Grinder” -- pending any changes, of course.