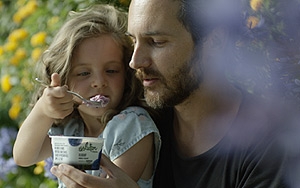 The ad campaign is timed to coincide with the completion of the products' roll-out in grocery and club stores nationwide.

This spring, the brands also co-launched Evolution Fresh Smoothies and Evolution Fresh Greek Yogurt Parfaits. The smoothies debuted in March in 4,300 Starbucks stores in the Pacific Northwest and Northern California, and licensed Starbucks locations in some U.S. grocery and mass merchandise chains. The parfaits launched in May in 6,000 of Starbucks' stores across the U.S.

All of the new products combine Dannon nonfat Greek yogurt and Evolution Fresh's fruit (and cold-pressed fruit and vegetable juices, in the case of the smoothies).

Like the smoothies and parfaits, the new packaged Greek yogurts have a few, "simple and recognizable" ingredients, and no preservatives or artificial flavors or sweeteners, stress the companies. The yogurts are sweetened with agave, have at least 11 grams of protein and 120 calories in a 5.3-ounce cup, and come in blueberry, black cherry, raspberry and pineapple passion fruit varieties.

With a suggested retail of $1.69, they are Dannon's first foray into premium Greek yogurt, which makes up 5 to 10% of the total yogurt category, Jeffrey Rothman, VP of marketing and innovation for Dannon USA, tells Marketing Daily.

Is there room for another Greek yogurt? Retail shelves are already jam-packed with Greek brands and varieties, and after years of  sales growth in the low double and high single digits, the Greek subcategory grew by a comparatively modest 3.4% last year, according to Packaged Facts. In fact, in recent times, existing brands have been fighting for volume and share with promotional pricing.

Rothman says that retailers have shown exceptional enthusiasm for the new line because of consumer demand for simpler, more natural products and the Evolution products' natural taste. The products feature the mildest Greek nonfat yogurt in the marketplace, which was specifically developed to showcase rather than overwhelm the taste of the fruit content, as well as make it possible to forgo additives, he explains.

The digital campaign launching this month conveys these messages with video vignettes (screen shot shown) showing young adults and families enjoying the yogurt in between outdoor activities like running, swimming, surfing, strolling through a farmer's market, and having a balloon fight.

The campaign is based on the brand message that "life and the world we live in are amazing enough without anything added," says Rothman.

Asked if the Evolution Fresh smoothies and parfaits might also eventually be introduced in grocery retailers, Rothman said that Dannon and Evolution Fresh are working on an "innovation pipeline," and that a CPG scenario is one of a variety of possibilities, depending on the extent of the products' success.

He notes that Starbucks' phenomenally successful, 20-year-old Frappuccino products were introduced and established in Starbucks stores, then launched as a bottled product line in grocery retailers.