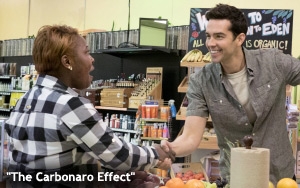 This week on “The Carbonaro Effect,” illusionist Michael Carbonaro stunned a woman into believing she had just witnessed living beings from outer space multiplying before her eyes.

When these beings -- eight-legged furry arachnids that certainly looked exotic but were most definitely indigenous to the planet Earth -- suddenly seemed to transform themselves into kittens, the woman lost it. She beat a hasty retreat across the room as tears ran down her face. She was both frightened and excited, since she was convinced that she and Carbonaro, who was masquerading as some sort of researcher, had accidentally stumbled upon the first living things from outer space that any pair of earthbound humans had ever encountered.

She was soon informed that the whole thing was a fake, part of this hidden-camera TV show called “The Carbonaro Effect.” The illusions that Carbonaro, 39, stages on this show are mind-boggling enough, but the real key to this show is the way in which Carbonaro breaks the news to his unwitting participants that they’ve been had.

I don’t know how he does it, but he seems to have such a winning, sunny personality that the marks for his hidden-camera con games never seem to strike out in anger or otherwise react in any way other than with good-natured acceptance.

It might also be true that some of these people have become angry. Maybe Carbonaro has even been attacked. But the producers of “The Carbonaro Effect” -- which started its second season this past Wednesday night on TruTV -- seem to have made the conscious decision to stay away from showing any such reactions.

If that’s the case, it’s a shrewd choice because it sets “The Carbonaro Effect” apart from other shows of this type in which such reactions are hoped for -- and the angrier the better.

Perhaps one reason why the reactions are not so angry on “The Carbonaro Effect” is due not only to Carbonaro’s non-threatening personality, but also because the trickery he choreographs is so inventive that his marks are more astounded than offended by what he’s just done to them.

In the same premiere episode this past week, he pretended to be a clerk at a juice stand inside a food marketplace (the kind with various stalls from a multiplicity of food purveyors) and had passersby believing that he could extract a half-gallon of juice from a single orange. He persuaded them that it was all due to a small plastic gizmo he showed them.

To a viewer at home, the idea that this 2-cent plastic thingie could turn oranges into miracle fruits capable of producing great pitchers full of juice was ludicrous. But Carbonaro is a sleight-of-hand artist who is anything if not convincing to the people he draws to his juice stands or other venues he stakes out for these bits. Among other locations, he can often be seen manning the cashier’s desk at convenience stores where he sells people bags of salty snacks, for example, that seem perfectly normal but then are found to have living things inside them, even though they appeared to be adequately sealed.

The juice bit this week was followed by something even more surprising, if not jarring. Carbonaro fooled a young couple into believing that small animals were capable of burrowing unnoticed into the insides of cantaloupes, where they then take up permanent residence and feed on the melons’ innards. To bring the point home, he broke open what seemed like a solid cantaloupe and revealed a cute little animal inside. He claimed matter-of-factly that it was a baby hedgehog.

His two “victims” stared open-mouthed at this spectacle and declared this heretofore unknown revelation about the natural world to be simply amazing.

So is this show, as a matter of fact -- a hidden-camera prank show where nobody gets hurt and everybody has fun, especially viewers at home.

“The Carbonaro Effect” airs Wednesday nights at 10 Eastern on TruTV.