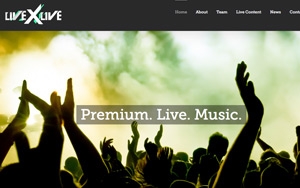 LiveXLive announced are partnering with POSSIBLE Mobile to develop a live music streaming and mobile platform set to launch this fall.

POSSIBLE Mobile, recently acquired by WPP, has worked with Major League Soccer, the PGA Tour and Better Homes and Gardens to design and build apps.

“We see brands becoming deeply focused on connecting with consumers via live streamed video,” said LiveXLive President John Petrocelli. So far, there isn’t a dominant brand in live streamed media in the way that ESPN dominates sports or CNN the news.

Interpreting rapid growth in both music festivals and mobile users’ engagement with music as signs of a ready audience, LiveXLive has taken an if-you-build-it-they-will-come approach to expansion. The company has built out quickly since it formed in May.

Earlier in June, LiveXLive announced an agreement with LiveOne, whose social media app Crowdsurfing essentially creates a digital arena in which viewers can interact with each other during concerts. Then in July, the company chose Verizon Digital Media Services to deliver their live music streaming network.

Expanding into mobile is a logical next step, as more Web time is spent on mobile than on desktop and the vast majority of that time is spent with video.

The LiveXLive network features curated content that runs the gamut of music to include music-inspired fashion, food and lifestyle content as well as artist interviews and backstage access. All genres of music will be featured on their platform, including rock, pop, indie, alternative, EDM, and country.