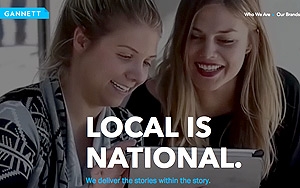 Gannett announced its quarterly revenue results as a standalone company this week — although it still wasn’t independent for most of the period being reported.

As in previous quarters, the decline in newspaper publishing revenues was due to drops in both advertising and circulation revenues.

Within the domestic advertising figures, retail advertising at Gannett’s U.S. properties was down 10.6%, national advertising 13.9%, and classifieds 5.3%.

Gannett president and CEO Robert Dickey noted a number of new growth initiatives from Gannett, including acquisitions in the U.S. and UK and the introduction of a new mobile version of its high-visibility “Gravity” video ad unit. Gravity units, which debuted on USA Today’s website last year, are full screen video ads. Users only see the ads once in a 24-hour period and can exit them at any time.